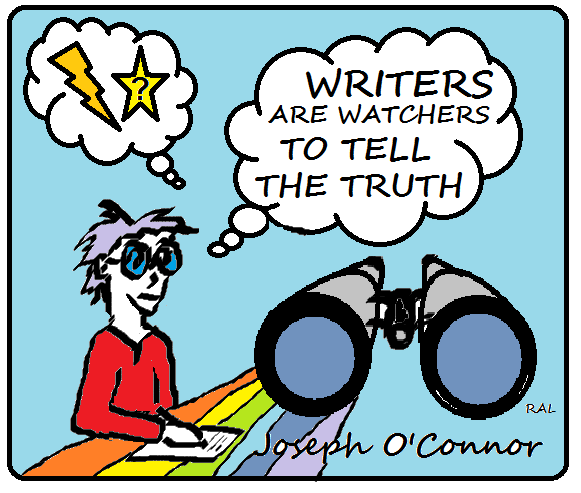 Joseph O'Connor (1997) discusses writers as 'watchers' in his Introduction to the 1997 Fish Anthology, Dog Days & Other Stories. O'Connor talks about such watchers/writers as Raymond Carver and Flannery O'Connor and their observation skills, not in any classic or academic or scientific sense but in an almost childish and ignorant sense, without the barrier of prejudice, a way of seeing that assumes or presupposes little, creating an ability to be open to the revelation of the extraordinary in the ordinary (Ibid).

I used to want to know everything. That was until I knew I couldn't. When I knew I couldn't, I stopped feeling that I was a lesser person or uneducated because I didn't know something in particular. I stopped gathering knowledge like cheap beads for necklaces I would never wear or sell or give as gifts but hoard in boxes for no other reason but to acquire, to be in possession of, to have power over and control. I still wanted to learn and when I stopped feeling guilty and let myself off the hook, I was able to disengage from the fear and pressure and was free to 'watch', to be one of the intrepid explorers I admired as a child. They weren't any better than me. I could be just like them if I let go of such a tight reign on my insecurities and used them instead to help me question, interrogate, examine and wonder. I am just like the 'watchers' because I am one of them. Instead of having made up our minds about everything we see, we wonder and wait to be presented with new information, to see other aspects uncovered, to be enthralled, surprised and uplifted by the light of the hidden brilliance of the everyday revealed...to be enlightened.

'watch for the extraordinary magic that lies in the everyday.'

O'Connor tells us we have to have our eyes open all the time, that we are always trying to 'make some sense of things', that we are writers 24/7, that its important to be writing all the time, even when we are not physically tapping the keyboard or putting pen to paper like James Thurber who is admonished by his family at times for that far-away-look that means he is writing in his head (Ibid). We all know that feeling when an idea takes hold. Or when we see something in a completely new light. Or when something becomes a question and an unknown when it was once straightforward and made sense.

'A short story is a glance at the miraculous.'

Joyce called them 'epiphanies' and Prichett called them 'something glimpsed from the corner of the eye in passing', according to O'Connor (Ibid). My job as a writer, O' Connor tells me, is then to record this miracle, epiphany or note-worthy something and develop the writing skills to properly present this observation accurately and appropriately. As O'Connor (1997) explains, what we have to do as writers is:

'To tell the truth.'