'One learns most clearly what not to do by reading bad prose... Good writing, on the other hand, teaches the learner writer about style, graceful narration,  plot development, the creation of believable characters and truth telling.' (Stephen King, 2000, p.146)


In On Writing: Planning & Possibility, I discover what I must do to be a writer. Its pretty obvious, when Stephen King (2000) says - 'read a lot and write a lot' (p. 145). At the moment I am reading I Know Why the Caged Bird Sings written by Maya Angelou and Getting Rid of Matthew by Jane Fallon. King talks about learning from good writing and bad, and however much I like or dislike either book, I find I am learning from them both.

Being able to read using handheld technology means that we don't have to rely solely on conventional books anymore. I have no excuses for not having time to read or not having something available to read. I can listen to a book on the bus or walking to work using my phone or read using my tablet, where a whole library is available in sometimes less than than the size of one single book. It also means that I can have a number of books on the go in different mediums and read them in a form appropriate to the situation. A paperback like The Guest Cat isn't going to strain your arm, but a kindle version is easier to read in dim light and an audio version is better when your eyes are tired from looking at print or a screen.

Of course all versions whether hardback, paperback, kindle or audio are all able to be learned from. On this occasion the two books I will examine are the handheld tech versions as follows:

I Know Why the Caged Bird Sings

I have wanted to read I Know Why the Caged Bird Sings for years and put it off as I had expected it to be too 'literary' or 'worthy' and finally was persuaded to engage with it when I discovered an audio version of the book read by the author Maya Angelou. It has, so far, been a joy to listen to Maya's clear voice and accent, telling her story. Although it is an autobiography it feels like fiction. It has that wonderful unpacking of characters and story which reveals plots and themes as we are taken on Angelou's childhood journey. She brings us with her exploring themes still relevant today, from conservatism to racism to child abuse to misogyny and does it in such a loving and 'graceful' way that does not bestow blame or judgement on the perpetrators but understanding and a calling to account.

If I had read it rather than listened to it I may have lost some of the subtleties of language and certainly found it slower going. Because of Angelou's clear speech and language I was able to listen to it at 3 times the speed. This meant keeping up a good pace and forward momentum. However there were times when I fell asleep with my earphones in or missed a line because of the noise on the train, where I had to rewind and find my place, finding a sense of deja vous in my return to the text. Other times, finding a great line, I would have liked to be able to turn over the page or bookmark the page without cutting off the flow, but instead had to pause and make a note on my phone. A small price to pay to hear Maya Angelou narrate her own story. 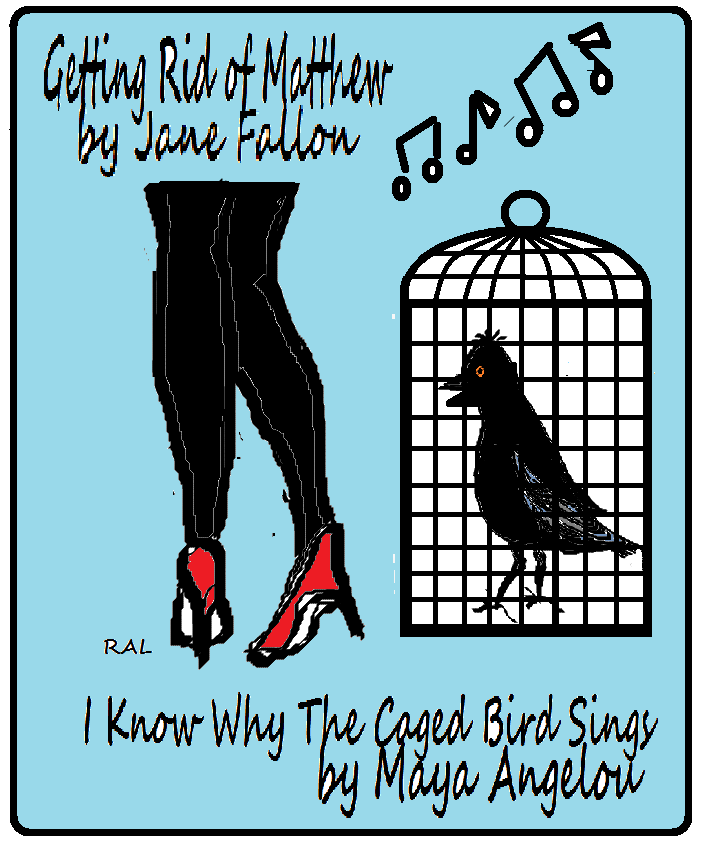 Getting Rid of Matthew

Getting Rid of Matthew by Jane Fallon was a book chosen by a book group I'm part of. I read the blurb and thought, great - something light and fun. The premise being - what would a woman do if her lover finally gives up his wife and kids for her just as she stops being interested in him - how would she get rid of him?

I though it sounded like, a bit of a Bridget Jones other-woman story. And because I remembered that book as being funny and becaue I had been assured in a review that this was a funny book, I was looking forward to some lighthearted entertainment.

So I downloaded Fallon's book onto my Kindle fire and started reading. Maybe I shouldn't have read it just after Timbuktu by Paul Auster or while I was reading I Know Why The Caged Bird Sings. I tried to take this into account, that an autobiography of Angelou's standard is in a different league and Timbuktu had the advantage of being able to use magic-realism to hear the story of a dog. However, a book with magic realism and narrated by a a dog was more believable and an autobiography had more of the strengths of fiction and both were funnier than Getting Rid of Matthew.

I have not finished Angelou's or Fallon's books but so far, their female perspectives are wildly different. Not just contextually or temporally but in their roundness and integrity of character. It may be said that Angelou has it easier, in that she is describing and recounting her own life. However, to be able to present the child version of herself is an act of interpretation which many fiction writers would struggle with especially in the when it comes to finding the truth in their stories. And the limitations of having to write what actually happened rather than what would be useful for the story to have happened meant there had to be a use of form and style and language which moulded the happenings into an entertaining coherence. Fallon's main female character Helen, with all her available fictional traits and actions, has so far been just a cardboard cutout from a TV sitcom and has the plot driven cliched changes to character necessary to move an episode in a serial forward for the next week. For all the misogyny that Angelou experiences and presents in her childhood account, Getting Rid of Matthew creates a more misogynistic world promoted by the main female character herself which is not balanced or challenged by other more rounded and believable or sympathetic female characters.

It may not seem fair to judge the books side by side. They are from different times and genres, post-modern Chick Lit from 2007 and Literary Autobiography from 1969. But both are the first books of female writers with females as central characters. Mainly I judge them side by side because I am reading them concurrently and both are books which I purchased when I could have avoided reading them or even avoided paying for them by borrowing them. But I invested in both books literally and figuratively so feel its fair to judge them side by side as such. And learn from this comparison.

When I finish both books, if I change my mind or find more to say on the subject I will write another related post. And if I don't I won't.

But whatever I do I will learn.
Posted by Rosaleen Lynch at 21:19