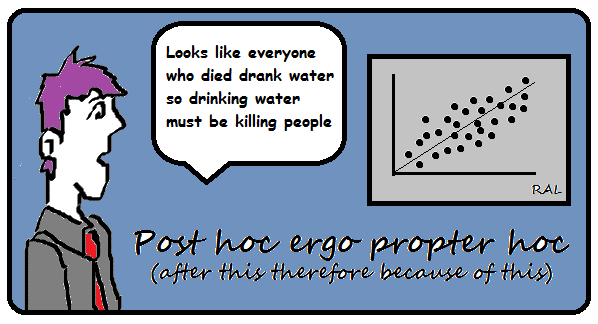 Much superstition comes from the post hoc fallacy, when people think that because something happened after another thing, that it happened because of it (Logical Fallacies). This is the case in everything from people wearing lucky socks (or pants) to more serious inferences which have caused mistakes and delays in medical diagnoses.


'Are we not all apt to assume too easily that because something follows something else it must be due to it?'

Rudolf (1938, p.281) speaks of the 'infinite regress' when looking for the cause of pneumonia, and whether it was the pneumococcus, or chill creating conditions, or why the patient got the chill (sleeping in a ditch), or why he slept in a ditch (because he was drunk) or why he got drunk (because he won some money). Of course it makes no sense to say that pneumonia is caused by winning money, but how far back in the chain of events must we go for the cause?


Rudolf (1938) talks about malaria's development in history from being evil spirits which entered the body from the mists around marshes and stagnant pools of water to being caused by the mosquito of those parts (p.282). Some answers can be right for the wrong reasons, such as in ancient history when it was found that cinchona relieved fever, which was seen as driving out the evil spirit (Rudolf, 1938, p.283). If as Rudolf, suggests, we replace the words 'evil spirit' with 'infecting agent' we can see that these primitive diagnoses where right, just for the wrong reasons (Ibid).


So, at times, in absence of a cause that we can identify (or understand) we can instead replace a cause with something merely related or in the language and context we do understand. Mists have evil spirits that can cause malaria and if I wear my lucky socks my team will win. Neither my socks or evil spirits will have any effect on my team winning or getting malaria. Or crossed fingers or knocking on wood. One does not cause the other.

Rudolf (1938, p.282) contends that nothing causes the other but that it is just an overlapping of time lines with a result, he tells us there is no answer to the question:


'Which came first, the chicken or the egg?'

I would agree in this context, however do think that, as dinosaurs laid eggs and they existed before chickens, that in an evolutionary context, the egg came first!
.
Rudolf, R. D. (1938) The Post Hoc Ergo Propter Hoc Fallacy in Medicine, Canadian Medical Association Journal, 1938 Mar; 38(3): 281–284


Related posts:
More examples of Post Hoc Fallacy in About Education
Posted by Rosaleen Lynch at 14:19