Room 101: We Are Our Greatest Fear

Am I Winston Smith or a Prole? I don't know. I don't even know which I'd prefer to be. Would I prefer to live in ignorance or knowledge of the control others have over me? Do I have to know what freedom is to have it? And when we know what it is, is that when we realise we don't have it.
Does that make the slogans in the totalitarian state of Nineteen Eighty-four true? Is it true that Freedom is Slavery? Is it true that Ignorance is Strength? Are we more able to cope the less we know of the evils and hardships of the world? Does knowledge bring fear?

Fear can hold us back, and make us appear weak. Or the opposite. You bring your guard up. To protect you attack. Is this what is meant by War is Peace? To preserve peace we go to war?

Of course everything is true and not, depending on the context. I could outline a number of examples to prove the case either way. But that would be Doublespeak. For instance, I might not want freedom, to think for myself. I might prefer to submit to the powers that be and live in ignorance, protected from the big bad wolf they remind me of. So I may be a slave to the convention, religion, rule or law enforced but have the freedom that comes with no responsibility. Or as the Goldstein’s Manifesto says 'the consciousness of being at war, and therefore in danger, makes the handing-over of all power to a small caste seem the natural, unavoidable condition of survival'.

So where is our Freedom? What part of our lives is not controlled from outside, whether by convention, religion, law or rule?

Nothing is our own we are told in 'except a few cubic centimetres' inside our heads but we are tested on that regularly whether in SATs tests or in conversation or the way we live our lives in general where if we do not adhere to the norm we are cast out. Its the Garden of Eden all over again. Big Brother and the Thought Police were there as they were in Winston's world, as they are in ours.

And the media and historians write their versions of events, as the party slogan in Nineteen Eighty-four went:

Nothing can ever be entirely accurately and objectively recorded. The very act of observation changes it to a subjective act. Eye witness accounts in court rooms are notoriously inconsistent with each other and documentary evidence.

This happens even without conscious intention. Imagine then what can happen when the intention is there. Propaganda like 'weapons of mass destruction'. Propaganda is a weapon of mass destruction. We manage to live in fear avoiding real life world issues such as deprivation and inequality while we protect what we are lucky to have from what appears to be a foreign threat.

We don't want the Proles or Winstons of the world to be educated to the point where we work this out for our selves. We will be harder to control. So our knowledge and education is limited by controlling measures such as charging fees for university (a financial control barrier) or by limiting our vocabulary and range of thought processes with Newspeak.

Don't you see that the whole aim of Newspeak
is to narrow the range of thought?
In the end we shall make Thoughtcrime literally impossible,
because there will be no words in which to express it.

So the world was round and flat at different times. Winston asks is a lunatic just a 'minority of one?' Just a non conformer. Just because everyone else thinks it – it doesn't make it so.

'Being in a minority,
even a minority of one, did not make you mad.
There was truth and there was untruth,
and if you clung to the truth even against the whole world,
you were not mad.'

What if our selfishness and greed was wiped out in evolutionary terms, in wars and murders. Could we evolve as humans to be able to life in peace, truth, love and plenty (the ironic names of the ministries which were in opposition to the promotion of those ideals). What if our goal in life was 'not to stay alive but to stay human'? Would we get better at it? Could we learn to be better humans rather than live in fear of what is outside ourselves?

Of course, as O Brien tells us, everyone knows what’s in the dreaded Room 101:

'The thing that is in Room 101 is the worst thing in the world.'

Anyone's Room 101 will contain their greatest fear. For Winston it would appear to be rats. However there weren't just rats in the room. There was also O'Brien and Winston. Winston, himself and another human being. Was his greatest fear in fact, the human... and perhaps even himself?

While we fear other humans and focus our energies on them, we don't on ourselves. While security in buildings and airports is ramped up and we buy more guns to protect our homes or we go to war to protect our 'way of life' we fail to see the real dangers. Ourselves. We are more likely to use a gun to kill ourselves than ever have someone else kill us with a gun. The states in the US with the highest rates of gun ownership are also the states with the highest suicide rates (Tavernise, 2013). 'Nearly a third more people die at their own hands than at other people’s' (Radford, 2013) but media still hypes a different view.

So why are we spending so much on defence and so little on education? In 2013 NationalPriorites.Org showed below how the American Dollar was spent that year : 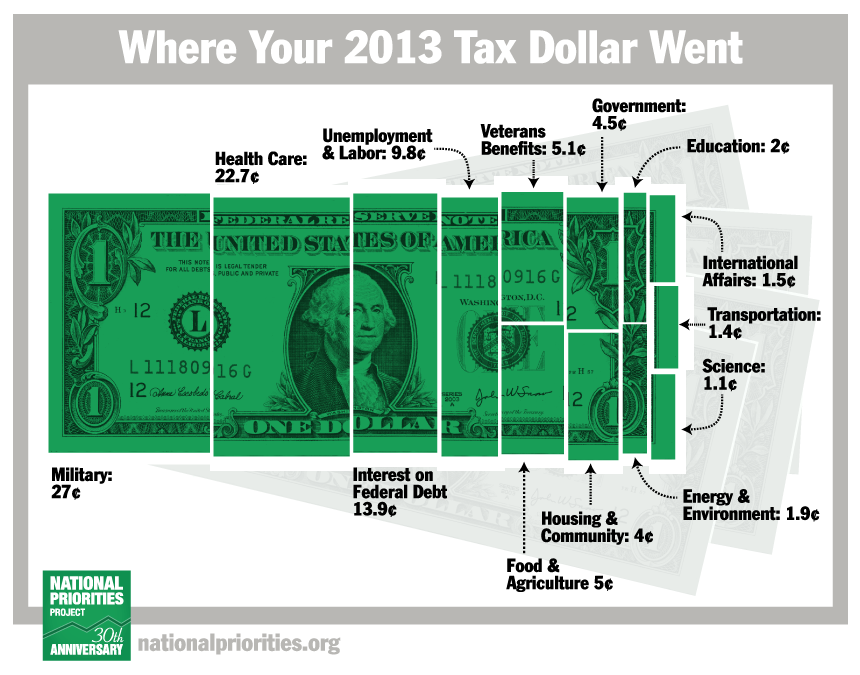 So 27% was Military spending while 2% was spent on Education (truth) and 5% on Food and Agriculture and 4% on Housing and Community (plenty). This seems to be out of proportion to need. Health Care (love), one of the biggest spends, still isn't as much as military spending.

Military and Veteran Benefit costs are nearly the same as the costs Health Care, Education, Food and Agriculture and Housing and Community combined. Imagine if the 33% spent on war was instead spent on peace and all its associated truth, love and plenty. The money could be spent on lessening fears whether related to war, or ignorance, or pain or deprivation and help promote the ideals and reality of peace, truth, love and plenty.
It won't happen overnight but we can begin with ourselves and finding the good that is in us all, spread that good and share that good. Look for it in others. Realise that taking a life out of the equation, whether someone else's or our own will not help us to find answers. That we all deserve peace, truth, love and plenty.