On Writing: Coming Out as a Writer 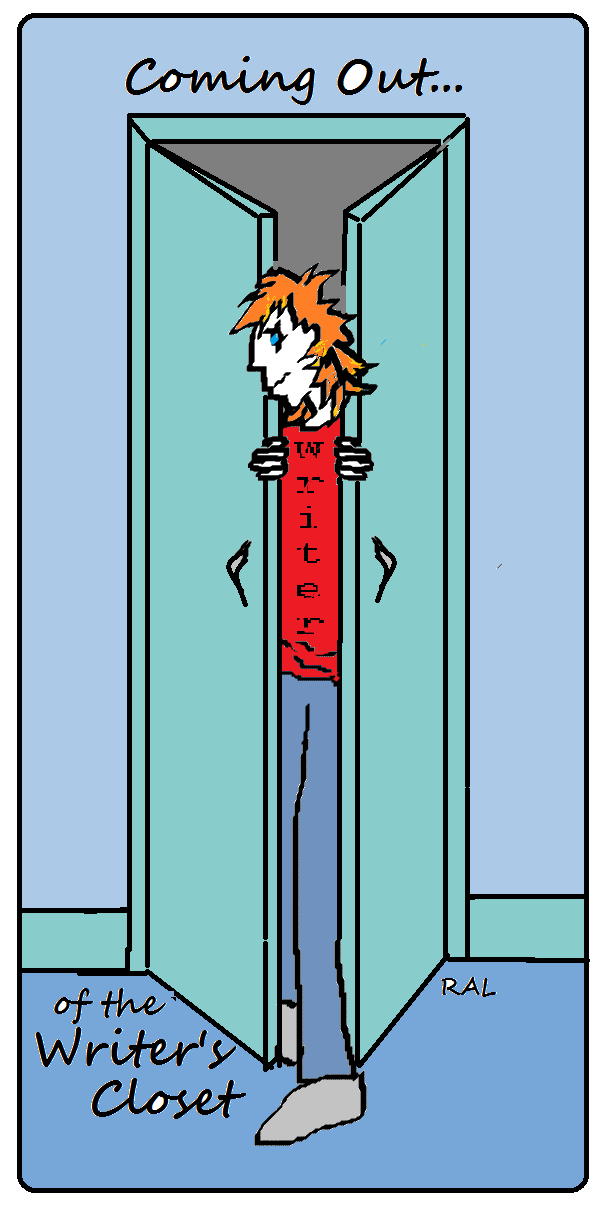 It it took almost 6 months writing this blog anonymously before I put my name on it. It took me just as long to tell a select few that it existed. It took over 80 posts, and over 6000 views of those posts  before I felt confident in being able to say I blog. All sensible precautions, I think. But what am I protecting myself from? Ridicule? Judgement? Attack? Yes. I am protecting myself from all  that and the questions, well-meaning and otherwise. Its one of the reasons I attend a writing class, just to be around people who know what it feels like and who accept me as one of them. I don't have to explain. They get it already.

Gradually however I have wanted to reveal my 'true nature' more and more. It started with making a pact with my partner to devote more of our leisure time to writing and the writing lifestyle. Then it progressed to the point that when I was asked by family or friends or colleagues what I had done at the weekend or that evening I started to tell them I'd been writing or gone to a cafe to write or been doing some research for my writing or that I'd attended my writing class. The more I wrote, and spoke about writing the more I felt like a writer and the more commitment I felt to the labour of writing. A virtuous circle.

So 'coming out' as a writer, to three 3 colleagues I used to work with, seemed a natural progression. They were teachers and had asked what I had been up to in the time since they saw me last. I just said it. I'd been writing. I wanted to take the words back as soon as I said them. I panicked and wished I could turn the clock backwards or forward, back to when they didn't know or forward to when they no longer saw it as a novelty but just saw it as  normal. They were interested and supportive and joked about me writing about them. This, of course, I rejected as a ridiculous idea but see the irony in me talking about them now.

They were great but it didn't matter how lovely they were, I might as well have called myself an astronaut because they had as much evidence proving I'd gone to the moon as proving I could write. And then what can be the evidence? Published work? I'd written a poem which appeared in my school magazine when I was fourteen. Too little, too far back? More recently I've written a poem which my writing class praised, even people who didn't like poetry. Does that count? I've written a novel which my partner (another writer ), on reading it, said he wished he'd written it, and a major publishing company said it had some merit but needed work. And I blog.

Yes. Not a lot to go on. So I have to be become more productive. I have to provide evidence. In my work as a youth and community worker I am very productive and have many stories to tell to prove my ability and experience as a practitioner in this area.  If I want to be as confident calling myself a writer I need to do the same. I need to practise writing and have others evaluate my practice, just as when I was training to be a teacher. That is why I blog, why I am attending a writing class and why I have started to submit some of my work for consideration. So far, just a poem and a short story. But its a start.

The more people who enjoy what I write, the more I will feel like a writer. However,  what I write will not be to everyones taste. I write poetry.  I write young adult fiction. I blog. If I write in a very narrow genre and am only appreciated by a few people what does that mean? It is a question of process and product? Everyone has some concept of the the process of writing and being a writer but the product seems to be the ultimate proof of your merit. I once got 93% for an essay in an MA in Childhood and Youth Studies. Does that mean I'm a writer? Or does that mean I can write a particular essay according to the criteria laid out, grammatically correct, appropriately punctuated and in a timely fashion?

I know I am a writer because when I was fourteen, how I dealt with the devastation of my grandfather's death was to write about it. I remember at my grandparents house, seeing him in candlelight at his wake, laid out in his suit in the bed downstairs in the sitting room. There were so many things wrong with the picture framed in the open doorway in relation to the world around it that I didn't look in again. I wrote Peacefully Within to explain why. I wrote to explore, record and tell others my feelings. I wrote to capture the moment and picture in time. I wrote because I coudn't do anything else. I've known since then that I'm a writer and however much I've disguised the fact in the intevening years, however many other doors I have avoided looking in, haven't opened or haven't gone through...finally I am opening a door, looking out, stepping into the light and coming out of the closet.