The Big Short & The Cost of Unemployment

The Big Short told the story of the 2007/8 housing market collapse and banking irregularities and the subsequent economic collapse in an engaging way that meant I came out of the movie feeling entertained and educated.

The story is one we are somewhat familiar with and one we certainly know a lot more about by the end of the movie. However one thing mentioned, hit a chord for me. Among the banking and housing terms and the stories of cover ups and high finance greed, it was mentioned that in the US, every time unemployment increases by a percentage that 40,000 people die. 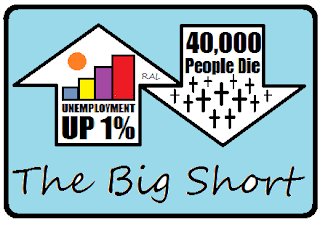 
'The Cost of Unemployment'

Thomas and Carson discuss a study where a 'one-percent-point increase in the unemployment rate will be associated with 37,000 deaths' (Ibid).

These deaths include:
In the UK the Trade Union Congress (TUC,  2010) found the 'costs of unemployment' to include higher mortality (including infant and maternal), increased ill health (mental and physical), increased substance abuse and increased poverty related other issues.

The cost to children includes  all the fall out from the above, such as:
We could think of the 'big short' as that of the toddlers who are, because of other people's greed, shorter than their peers. At least they are not part of the real 'Big Short' - all those who are dead - the real cost of greed.

Thomas, W. L. and Carson, R. B. (2014) The American Economy: How it Works and How it Doesn't, Routledge
TUC (2010) The Costs of Unemployment, a TUC Briefing to Mark the European Year for Combating Poverty and Social Exclusion,