Raised by Wolves - So much for keeping the wolf from the door! 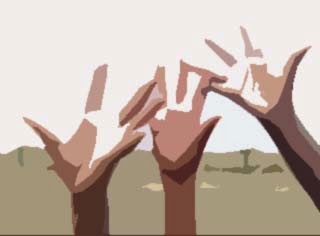 The nature nurture debate continues, but does it matter if you have genes that give you a good start in life when you could end up being raised by wolves?

The fairy tales like Rudyard Kipling's Jungle Book or earlier tales like that of Romulus and Remus all had happy endings. They didn't worry about the critical times for language acquisition or other such needs of a child. Real life Mowgli syndrome is an altogether more disturbing story, and one which doesn't even have to include four legged animals. In the case of Genie a ten year old girl brought up in isolation from human social contact, the animals who raised her were humans. There has been no happy ending there.

Of course we think this is an extreme case of horrific abuse and that most children who suffer abuse don't to that extent, that they have some measure of a quality of life. And we reckon it doesn't happen that often anyway.

And what about deprivation?

And because of this...

So how about nearer home? In Tower Hamlets, the East End of London there is a child poverty rate of over 50%. How can this be ? How can a London borough book ended by the illustrious City and the financial district of Canary Wharf have children living in poverty, and so many ?

The government committed to ending child poverty by 2020, however, according to the Guardian (2014), the Institute for Fiscal Studies predicts that by 2020 it will increase by 39%.

So much for keeping the wolf from the door !

So what happens to the children in the world who avoid or survive the abuse and deprivation? Do they grow up to do better than the previous generation or is their behaviour conditioned by the wolves that raised them? Whether children experience the animal-like carnivorous greed for food or the capitalist 'Wolf of Wall Street' greed for money, they will be conditioned by the extended capitalist media family, this wolf in sheep's clothing.


'We best measure a society’s true worth by how it treats its youngest members ‑ the girls and boys who would one day become tomorrow’s parents, citizens and leaders.'
Anthony Lake, Executive Director of the United Nations Children’s Fund (UNICEF)

Will our children grow up to be wolves too? Are we committing to an ever spiralling vicious circle and widening gap between the rich and poor? Creating a more unequal society. And more and more children in the world dying from neglect?

When we discuss the nature/nurture debate we do so as if the nurturing is a given. However I would contend that the word 'nurture'  is a contradiction in terms when it comes to children being raised by wolves. And that, considering the way that children are treated by the human animal, at times it would be kinder to throw them to the wolves.