Rubin's Vase was published on National Flash Fiction Day 2020 on June 6th.
I got the idea after I watched an episode of Tales from the Loop when a character was shown as being missing from everywhere they had been. I liked the idea of filling that space.
I researched 'negative space' and started the piece on my phone before I went to sleep and finished it on my laptop next day, pushing for the NFFD FlashFlood deadline.
'Ma' is used in my story, not just as a missing maternal family figure but as the Japanese word roughly translated as 'negative space'.
Although the story started out with the name 'Negative Space' when I saw another flash of the same name I changed it. I knew of Rubin's Vase but didn't know that's what it was called. It fit perfectly with my themes around communication, shifting perspective and filling in the blanks. 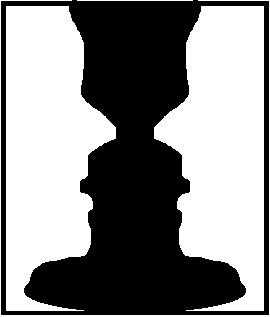