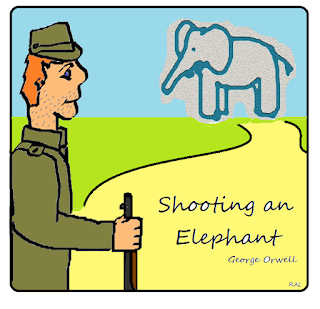 How likely is it that we might revert to the animal instinct of not showing weakness in case we are pounced upon?

Orwell (1936) in his story Shooting an Elephant describes a British Officer's experience in Burma, when as a representative of British rule and authority, he was called upon, by 'an unarmed native crowd', to shoot an elephant (p.95). Even though he did not think it was necessary, because it was expected of him, he did. And he did it 'solely to avoid looking a fool' (p.99)

How much do we do because of what is expected of us or to avoid appearing foolish or to maintain hegemony or a status quo? How much are we reverting to the animal instincts of not showing weakness?

The chimps of Gombe studied by Goodall, are unable to control their facial features and when they are afraid make a 'fear grimace' (Hall & Dawson, 1998, p.31). A chimp displaying such a 'fear grimace' will cover his face with his hands,  lest it be recognized as weakness and he is attacked by a rival (Ibid).

Are we constantly trying to hide our real emotions and live up to expectations, living in fear of showing weakness and being attacked?

How much do we go against our better judgements to maintain the status quo? What would it take for any one of us to end up shooting an elephant?