As this is my hundredth post I wondered what to write and thought 100 should feature in some way. Tonight at the youth centre where I work, I mentioned playing speed-Monopoly,  aka Hundred Dollar Monopoly, and my colleague suggested I could write about that, because of the 100 but also because its an example of how we adapt our resources to needs.

I remember playing Monopoly as a child, and wanting to play it more than I did. It was one of those games that held mystery and because it had so many components and was played so rarely it maintained the mystery for years. My favourite piece was the boot and when myself and my three brothers played it was taken for granted that was my piece. We never really read the rules and relied on parents and common sense to get us through. That didn't get us far and most games were abandoned in frustration rather than played to the end. But there was something magical about the game, not least because it was expensive and not everyone could afford it so was one of those games we were lucky to have.

Having younger brothers who's attention span was limited meant we sometimes made up our own rules, as all children do. I can't remember them but they made sense to us then. I look at the children's versions of games like Monopoly, Cluedo and Scrabble that are around today and I know we would not have appreciated them. We wanted to play the grown up game, even if we did make up our own rules.


There is something about the money as a child which is enthralling. I see it exactly the same with the children I work with. The property aspect goes over most heads, its the money that attracts them. The best part always seems to be when you get your money and everyone has the same, and when you get more, its better but one disadvantage of winning more money, especially if you are enjoying the game, is that the more you win, the closer the game comes to the end. And when you have invested in the game and see this happening, it starts to lose its appeal. I remember, in particular, occasions when one person had had the luck of the draw and seemed to have hotels on all the most expensive properties and was winning hands down, the joy of the game was lost for them, as the competition was over and was certainly lost for those losing.

So I know the game of Monopoly and have seen many games to their ends, which I suspect is not the case with many other people. I imagine more games are abandoned and adapted than actually played to the end by the rules (its certainly the case in our youth centre). So when the young people wanted to play a game recently I invented my version of speed-Monopoly called Hundred Dollar Monopoly. I'm sure I didn't invent it, and probably cobbled the idea from other versions and previous made-up-rules from childhood. But if you do want to play a fast game within a limited time frame, and you don't want the outright winner to leave everyone in the dust, here are the rules:

At the end of the prescribed time the money is counted up and whoever has the most wins.

My partner commented that I seemed to have invented Communist Monopoly, something of an oxymoron. And yes is is veering away somewhat from its Capitalist roots. It does seem to start with an even distribution of wealth and although there is a winner, it doesn't have to be at the expense of others, where one ends up with everything and the others nothing. Everyone seems, at the end, to have an adequate amount of money, only some more than others. And everyone still has most of their property, and none of that property is of more value than the next. I did a quick Google to see if there was a Communist Monopoly and found Kolejka (Queue) a Polish game based on Monopoly showing much of the down side of Communism. I suppose it is much like the trouble with Orwell's Animal Farm where at first on the wall were the words:

'All Animals are Equal.'

Which, over time, as ideals fell to the wayside of greed, the rule changed to:

'All Animals are Equal...but Some are More Equal than Others.' 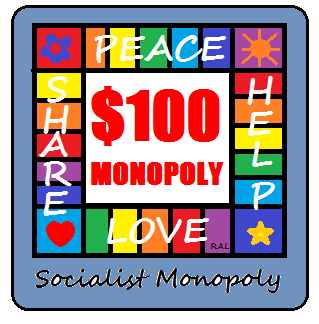 So it will be interesting to see if Hundred Dollar Monopoly develops any more rules and if they veer it more  towards Capitalism or Socialism. Of course the next step would be to create our own version which has shared property and resources and traded skills and the winner being the one who helped people the most and did the most to make the world a better place. Maybe a bit much to ask from a board game, but hey,  I didn't think I'd get to 100 posts either!
Posted by Rosaleen Lynch at 00:02