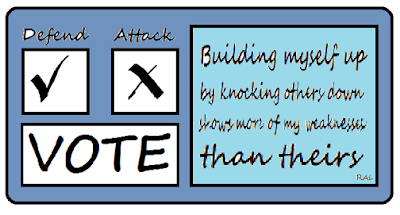 'Let not him who is houseless pull down the house of another, but let him work diligently and build one for himself, thus by example assuring that his own shall be safe from violence when built.'

I am deliberately taking this quote out of context (Lincoln really was talking about houses!) because I cannot find another quote which so eloquently tells us not to build ourselves up by knocking others down. I use it as a metaphor for the dangers of putting people down, and its ability to have the opposite effect of tarnishing our own reputations.

It was election day today and someone came to my front door trying to sway my vote, when I said I'd voted they then tried to sway my vote in the mayoral election. How? By bad-mouthing the other major candidate. Although I was already aware of the many faults of the candidate they were putting down, their manner of  argument was making me feel less likely to vote for the candidate they were representing.

I told them I didn't appreciate the cheap-shot strategy of discrediting the opposition. 'But', they said, 'Its true!' I said I already knew about what the candidate had done, it wasn't that I was disputing - it was the unprofessional manner in which they were presenting their case. The vocabulary they used was reactionary, incendiary and a poor representation of their political agenda. It was what I would expect from cheap-shot tabloid tactics, but not on my door-step.

The worst part of the interaction was that in all the arguments the person put forward, at no point in time did they describe the benefits or advantages of choosing their party candidate but instead spent all their time putting the other candidate down.

It may be true in sport that the best defence is a good offence, but it shouldn't hold true in life. Stand up for what you believe, tell me your values and ideals, but don't build yourself up by putting others down. It says more about you than them.