Sum of the Parts: Bricks and Walls

'The whole is more than the sum of the parts'


Attributed to Aristotle (350 BCE), this quote is but a crude summary of the Greek translation of the following discussion of a 'difficulty which has been stated with respect both to definitions and to numbers, what is the cause of their unity?' (Metaphysics, Book VIII, Part 6).

'In the case of all things which have several parts and in which the totality is not, as it were, a mere heap, but the whole is something beside the parts, there is a cause; for even in bodies contact is the cause of unity in some cases, and in others viscosity or some other such quality' (Ibid).


Aristotle (Ibid) considers the difficulty lies with the language we use to define the problem: 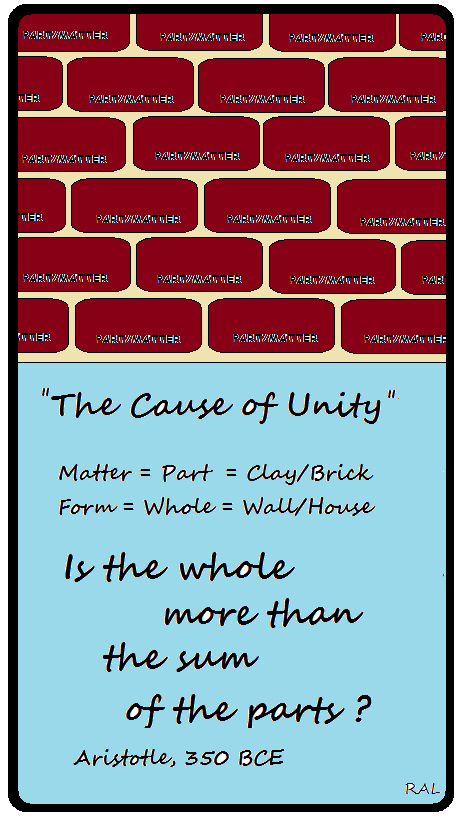 "Clearly, then, if people proceed thus in their usual manner of definition and speech, they cannot explain and solve the difficulty. But if, as we say, one element is matter and another is form, and one is potentially and the other actually, the question will no longer be thought a difficulty.'

So we differentiate with description of form using language, calling something what it is in terms of shape, function or other such quantiiative and qualatitive measuremnet...what it actually is . And the matter has the potential to be shaped or organized into the form. Encyclopedia Britanica describe it as follows: 'bricks and mortar are the matter that, given one form, become a house, or, given another, become a wall.'

Does that make the 'whole' the form and the 'parts' the matter?

Should then the adage read:


'The form is more than the sum of matter'?

Is the house more than the walls, the walls more than the bricks and the brick more than the clay?
Or if as Aristotle put it 'the whole is something beside the parts' and whether it is for the purpose of a brick, wall or house, it is simply the form in which the matter has been orgainzed and the 'the cause of unity'.

More on bricks & walls: On Writing & Finishing
Posted by Rosaleen Lynch at 17:37