Diane Doubtfire in 'The Craft of Novel Writing' starts with the theme - what the story is about, not the plot but what it is that concerns the writer, the subject of the the novel, like 'lonliness, revenge, betrayal, self discovery', and whatever the writer wants to say about it (p.1).

Doubtfire warn us that we might not start with a theme but that it will 'clarify as the book evolves'  (p.3). I didn't start writing my book with a theme. I always knew what my book was going to be about and certain issues I wanted to address but were they related to my theme?  I thought about this, having already written 60,000 words. My book, so far, was about life, death, coming of age, self-exploration. Is my theme, mortality?
And if this is my theme what does this mean as I go into the second half of editing this draft of the book? I know that I still have some action which I haven't pinned down in the third act and wonder if thinking of it in terms of what connects most to the theme will spark any ideas. With this in mind I thought about plot gaps and what action could be theme-led and realised that if I wanted to say more on the theme that that meant someone had to die. I already had someone die 'off-screen' but realised that either they had to come to the fore or I would have to look elsewhere. My main characters started to mill about in my imagination, looking concerned, wondering if they were going to be next to be killed off. I wasn't sure, I decided I would have to start writing to see. 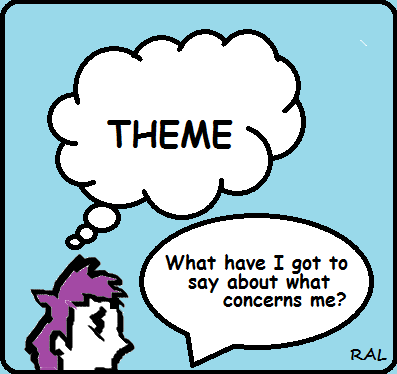 I remember doing Of Mice and Men by John Steinbeck, with my daughter when she was homeschooled.  We talked of themes then, as you do with GCSE English Coursework. The themes were related to the dreams and hopes that come from the fear of loneliness.

As we get to know each character we enter into a relationship with them and the more we understand their stories, the more we feel for them, hoping their dreams come true.

Base Theme: Try To Understand Each Other

John Steinbeck (1938, Journal, cited by Susan Shillinglaw in Of Mice and Men introduction)
Posted by Rosaleen Lynch at 16:00