Would we bother doing anything if we just accepted our lot? What would be the point? Nothing to be gained. We'd probably be happier. With realistic to no expectations. No need to dream. No need for fiction. No need for an imagination. Or the future. Just the here and now. No coulds or woulds, or the impossible, or improbable or odd or strange.

Listening to a friend's questioning of why people don't accept their lot I became aware of why I didn't. Mainly because otherwise I might not leave the sofa. With everything that was either hard or scary, if I didn't think there was some chance that things would get better why would I bother? I said to him, something along the lines of  'acceptance kills hope'. He agreed whoelheartedly and delightedly recounted a scene in the play Separate Tables by Terence Rattigan, where Major Pollack ask Miss Cooper about her lost love. 'Any hope?' he asks. She replies, cheerfully, 'No, none at all.' He asks why she's so cheerful about it and she tells him that there no point in being any other way. She says, 'I've settled for the situation you see, and its surprising how cheerful one can be when one give up hope.'

Could I be happier if I stopped hoping? My friend reminded me of the proverb 'What can't be cured must be endured.' But I amended it in my head to the less pithy: 'What can't be cured for now must be endured until....'  Or otherwise we would continue to live with polio, small pox and cancer. At one time none of these could be cured and if simply endured would not be eradicated as they have been and are being.

Marching in today's demonstration in the rain, in flip flops, with my rainbow PEACE flag over one shoulder and umbrella over the other, through Parliament Square to Downing Street, there was plenty of time to think. There was a background wash and sound-track of anti-war banners, Peace banners, placards saying 'Welfare not Warfare', chanting:

A French news camera appears in my face and I am asked by the cameraman, why I'm marching. I point to my flag. For Peace, I tell him. Peace as a process that doesn't just happen over night or can be brought about by bombs. He asks me what I thought of the death of Alan Henning. I said that it was shocking, as every death is shocking, and that nothing is solved by bombs. Peace is a process. A long one.

And we need hope.

So I don't accept that we fight fire with fire so we're all end up burnt. And it can't be an eye for an eye until we're all blind. We just can't teach peace through war.


'Everything that is done in the world is done by hope.'
Martin Luther 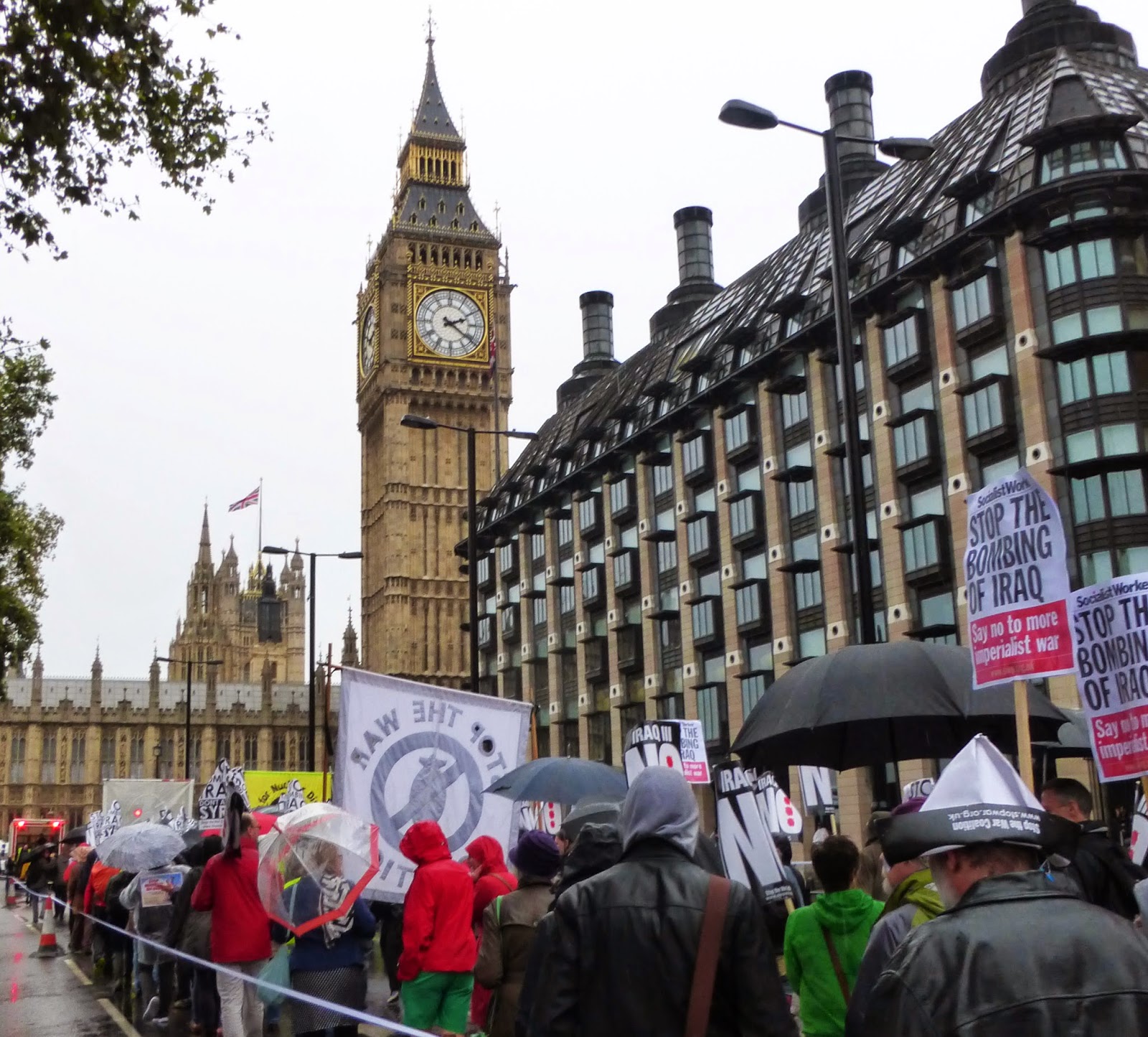 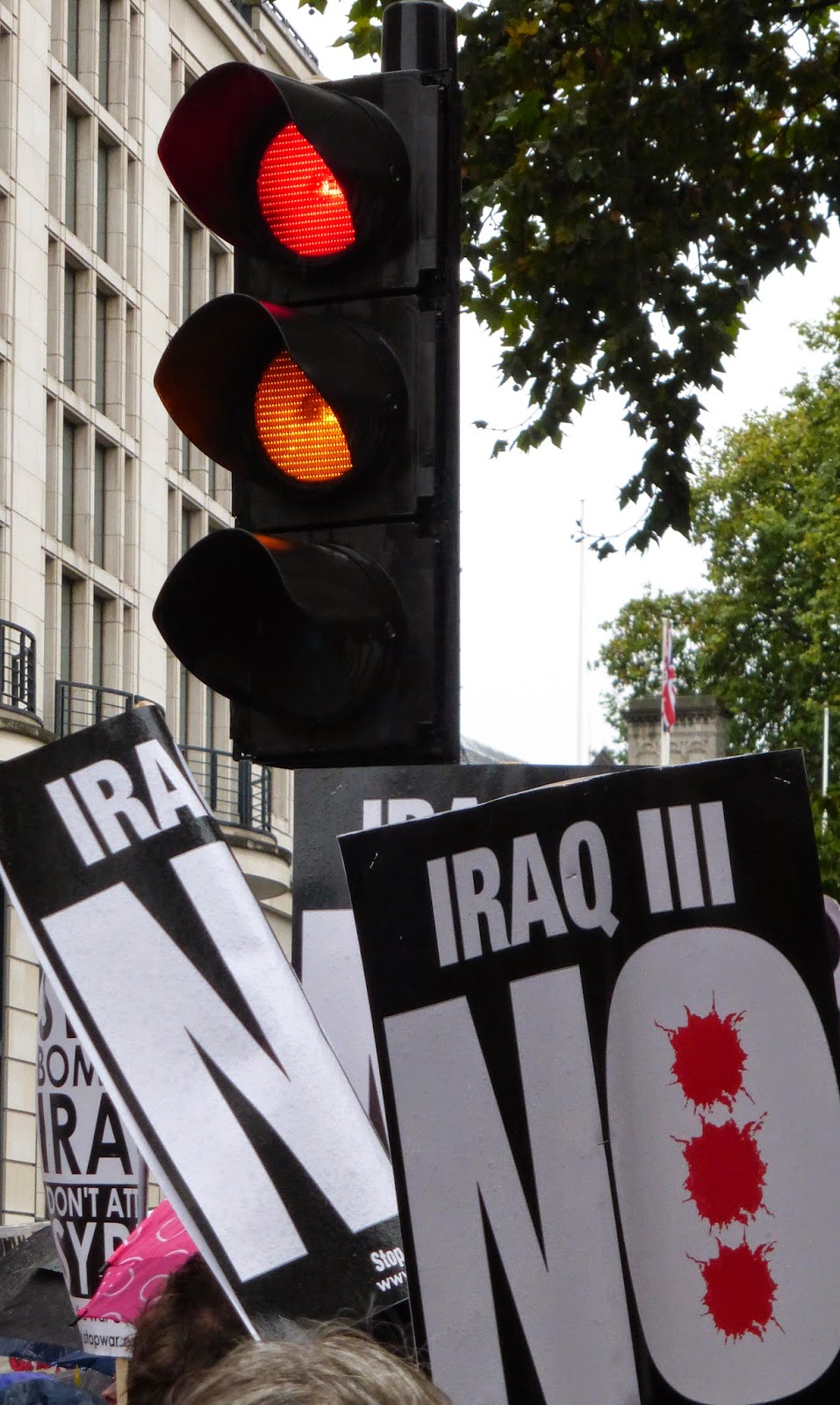 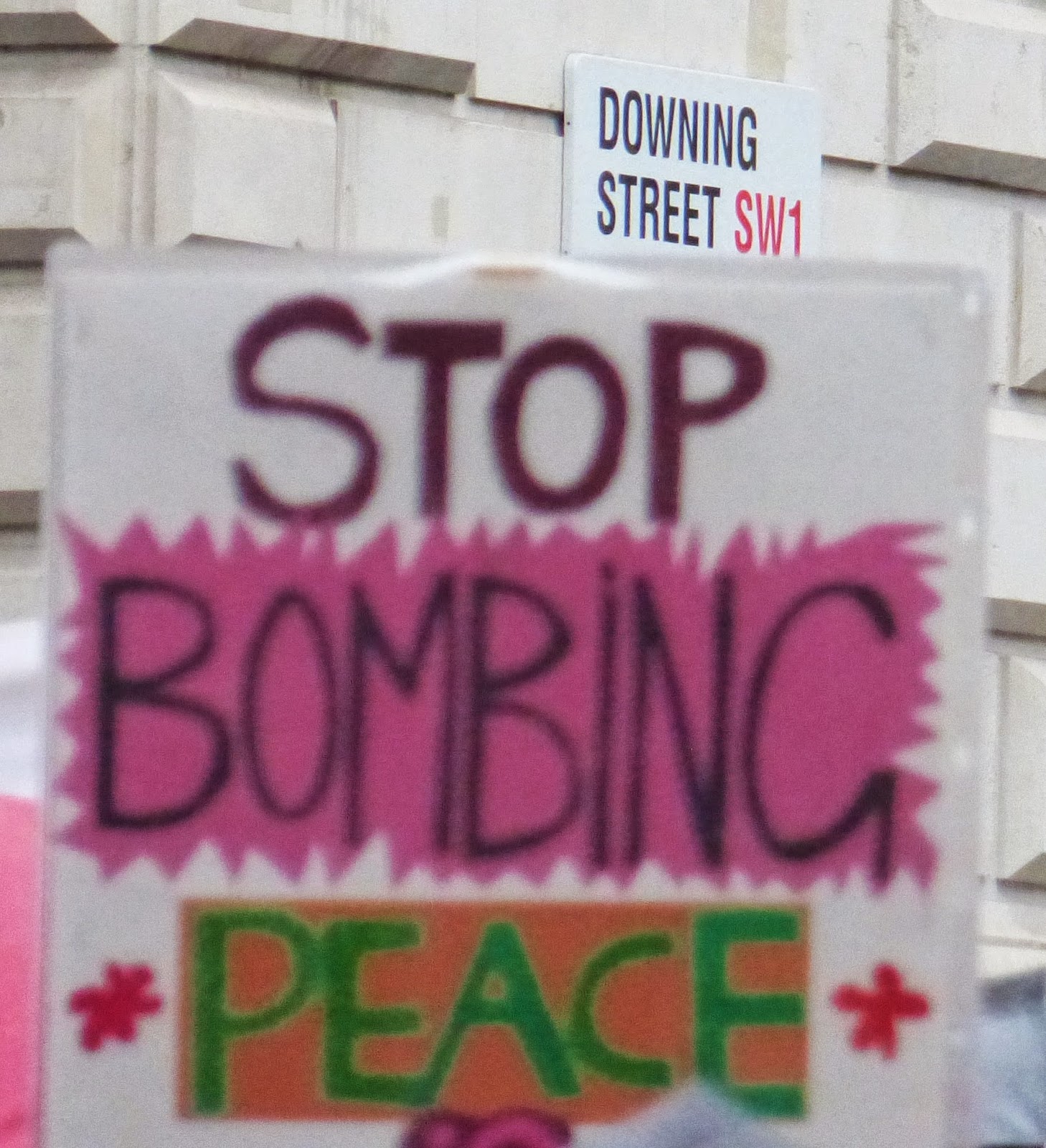 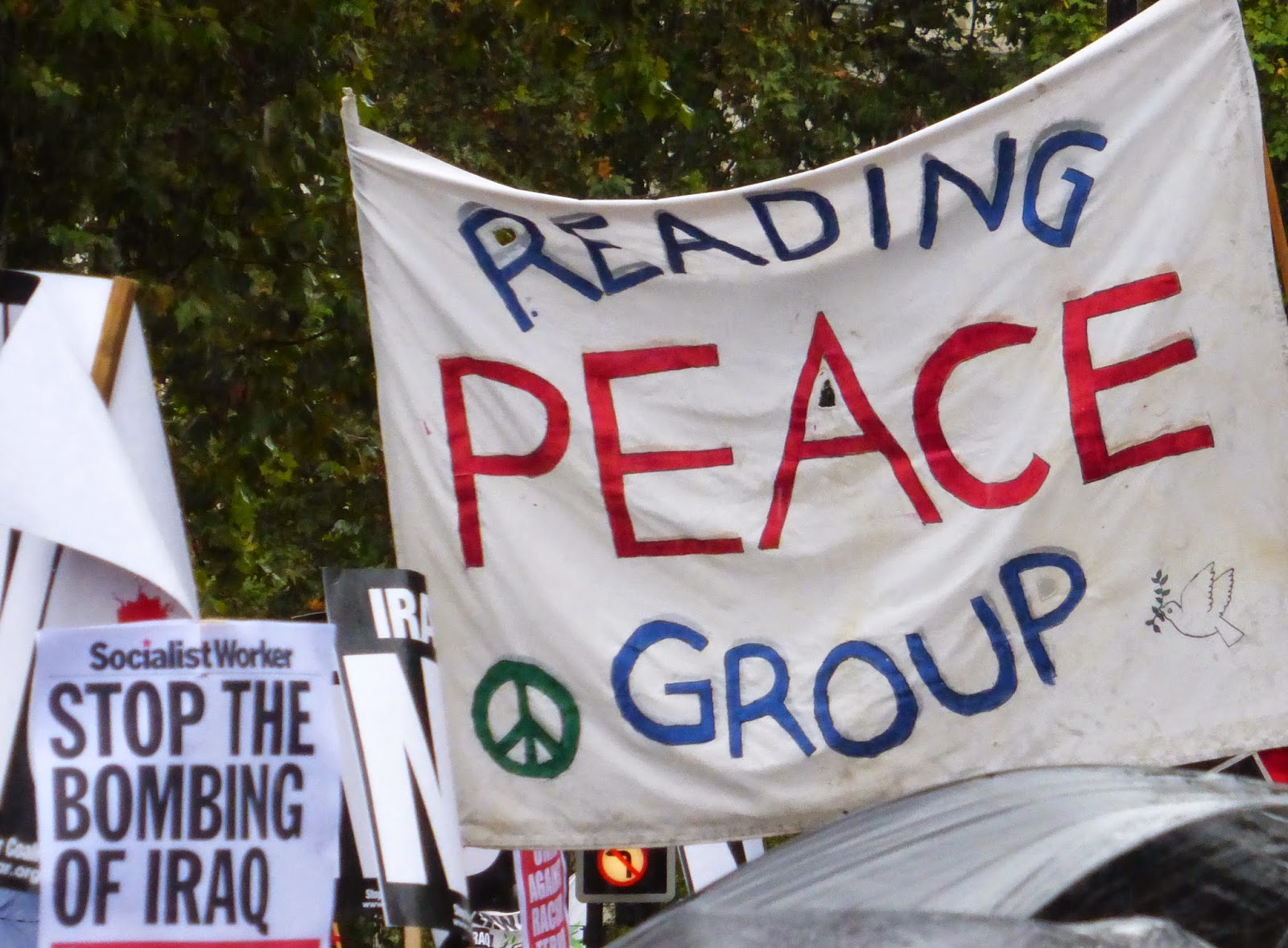 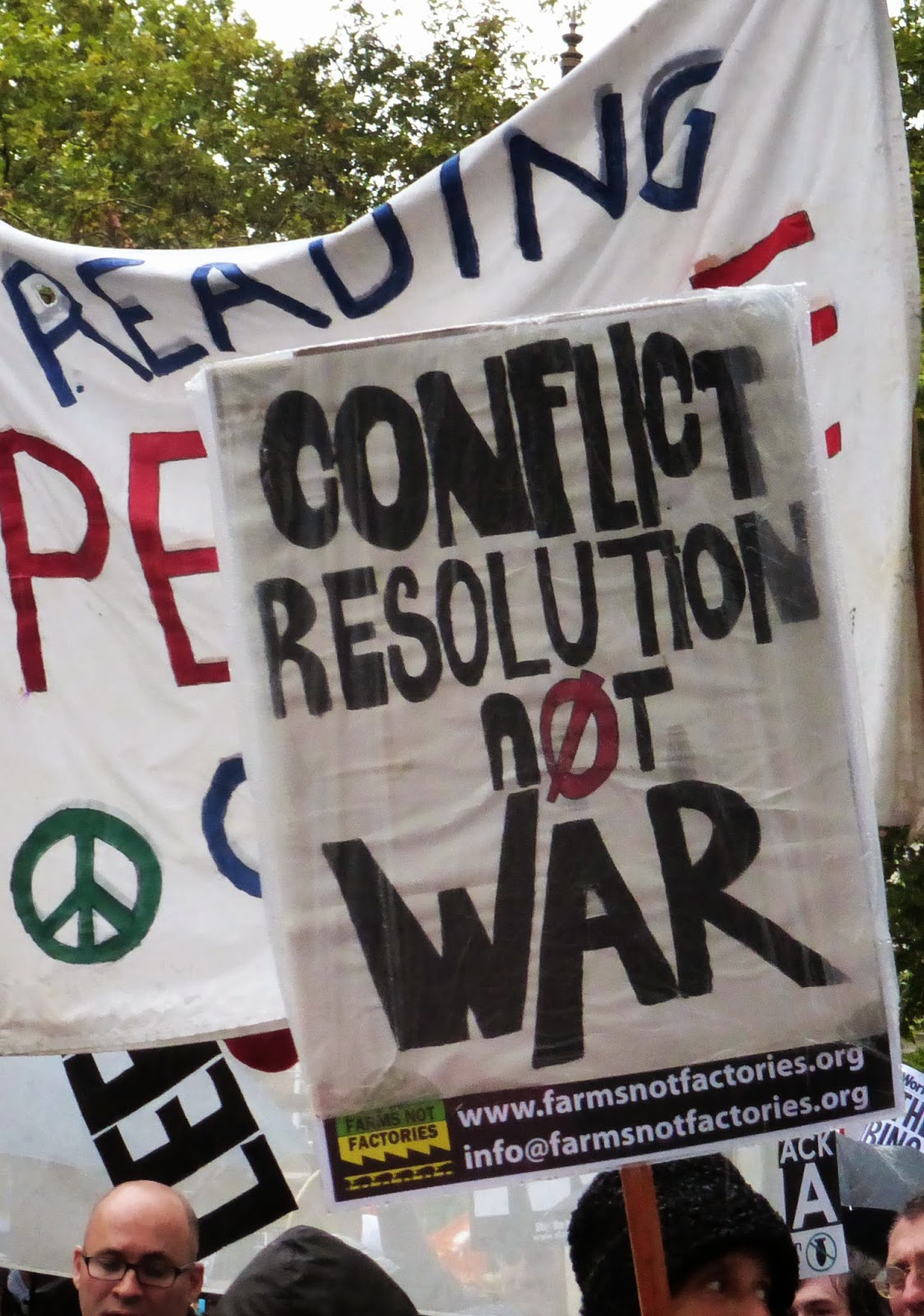 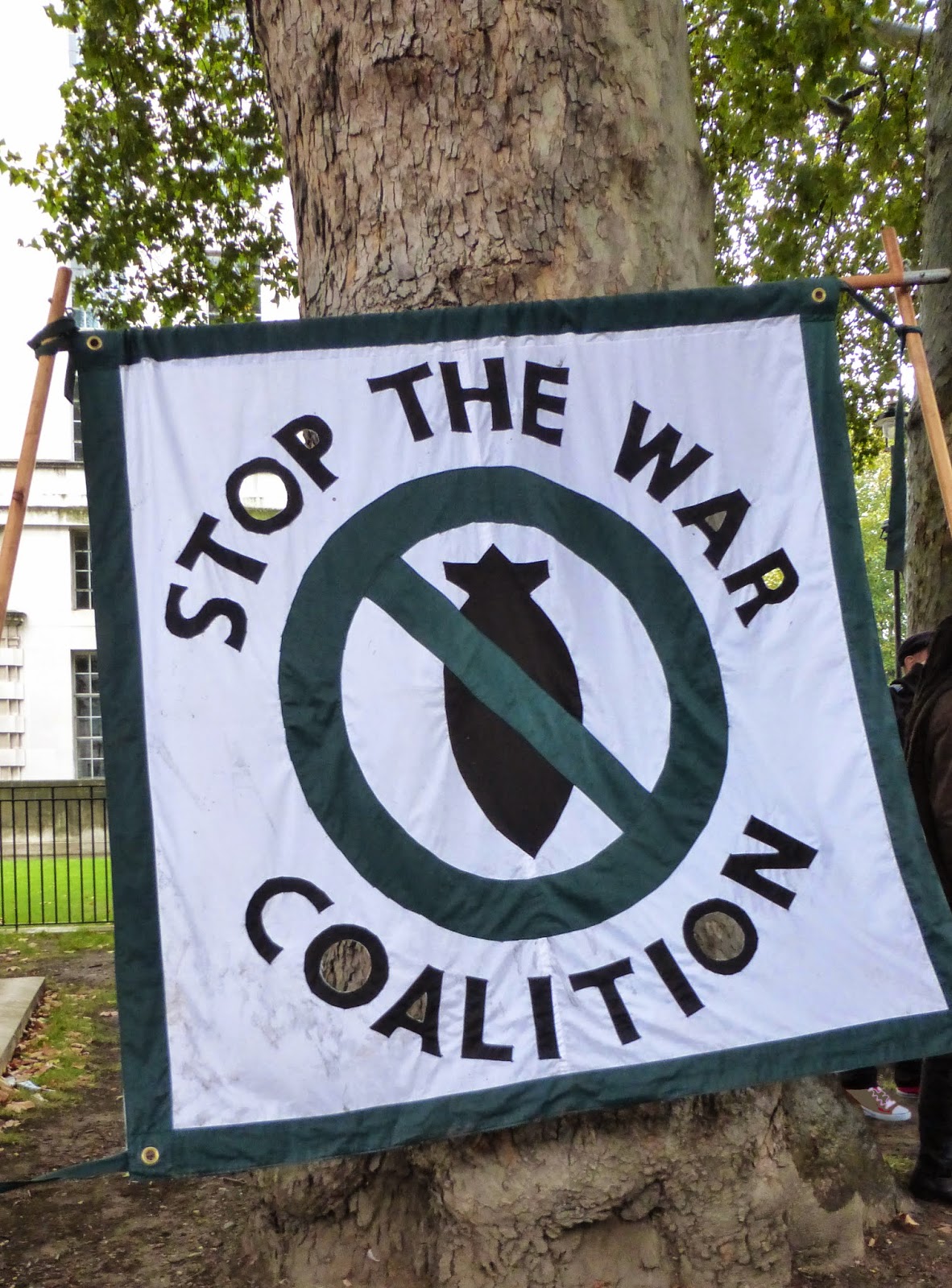 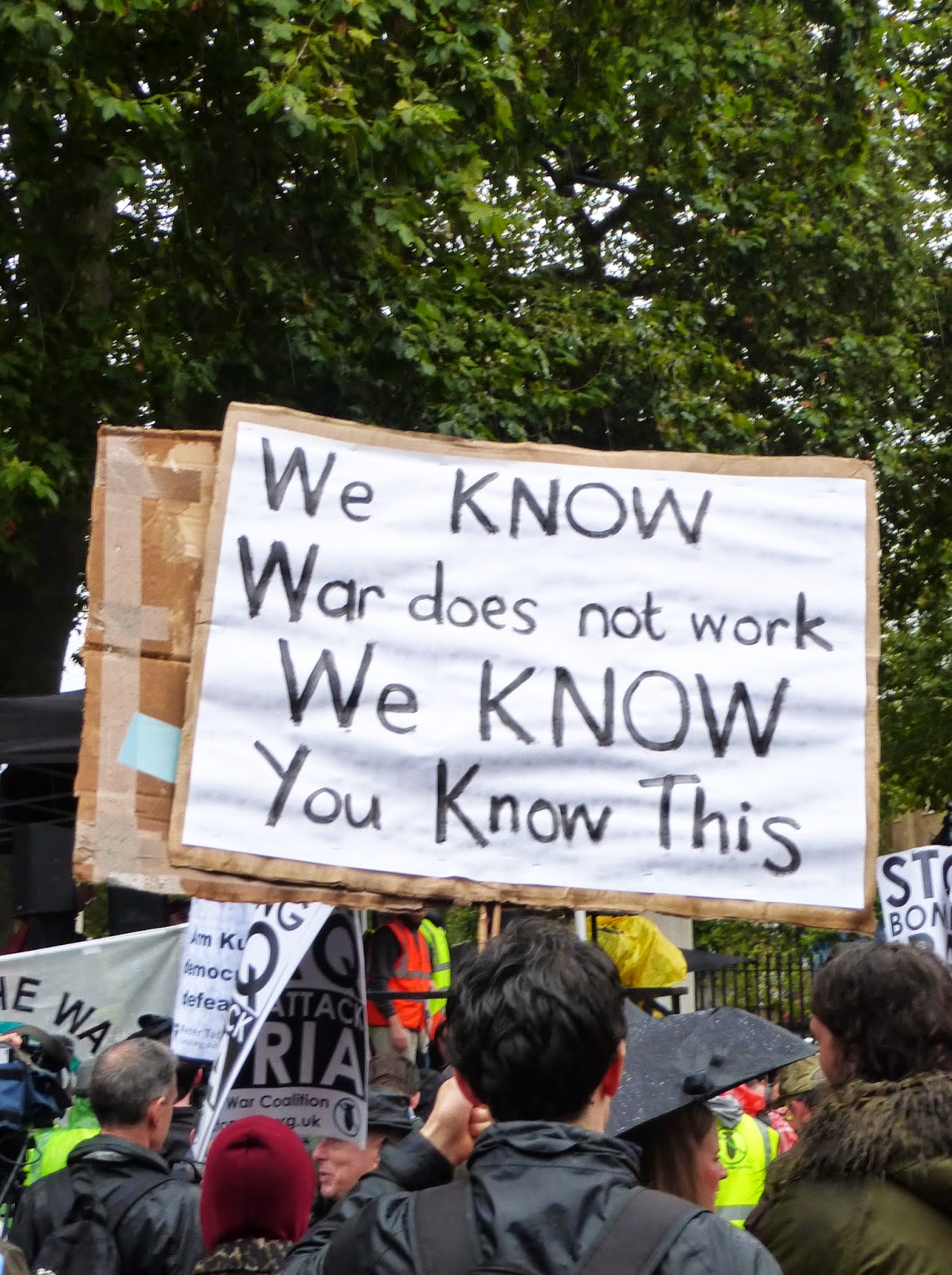