The Troxy, in the East End of London, hosted the latest immersive cinema event by Secret Cinema. Their strand called Secret Cinema X (which is a little less expensive & a lot more intimate) is not only at a secret location like the mainstream strand but also involves a secret unreleased film, undisclosed until arrival at the secret location. The tagline is: Tell No One. 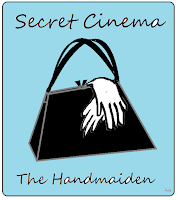 Having attended mainstream Secret Cinema experiences such as Star Wars, Dr Strangelove and 28 Days Later (and getting value for money considering what seems like a lot for watching a film you have seen before), it was interesting to try the Secret Cinema X, low-key and comparatively low cost version. When I went to my first one, Victoria, I didn't know what to expect. However from the start, even waiting in line outside, we were drawn into the secret world of the film, beginning with what looked like trouble-makers climbing over bins and looking for cigarettes. We were stamped with ink and then entered the blue-lit smokey atmosphere of a Berlin techno club thumping out beats. This was followed by the film, a gritty realistic movie of two hours in real time, filmed as one continuous shot. A great movie and experience.

On this occasion, the film was The Handmaiden by Park Chan-Wook. Beforehand, guests were told the location near the time and sworn to secrecy. The name of the film wasn't revealed until it appeared on the screen, (however there were hints leading up to the event and if you looked at film release dates you could put two and two together). The lead-up, including the mystery, quest and preparation beforehand, was nearly as much fun as the event.

Beforehand we were told to bring a notebook and pen, as we would have to be silent during the event and only communicate in writing or gestures. We were also told to wear black tie and evening gowns, with men in black gloves and women in white. We dug a little deeper and guessed the movie and geared up for 1930s evening dress in the appropriately Art Deco venue, that is the Troxy.

On arrival we were reminded of the rules of silence and the threat of expulsion if we broke the rules. We switched off and sealed our phones and followed a dark, lantern-lit stairway past cherry trees and nooses into the grand Art Deco venue.  As maids in 30's style Korean aproned-dress escorted people to their seats, everywhere notebooks were being written in or read, while wineglasses were filled on tables set with origami paper and instructions, lollipops and lanterns and a performance on stage including actors and musicians, leading up the start of the film (The lollipop's place in the scene-setting quickly became apparent).

During the film, pivotal moments were acted out on stage or behind lit Japanese-style screens, like a shadow puppet show with human bodies. Dry-ice rolling across the ground and cherry blossom petals falling from above, were some of the key touches which created the perfect atmosphere. After the film the tables were moved back to create a dance floor and cocktail lounge music played on into the night.

The only suggestions I would make for improvement are minor such as matching the food and drink holders/containers to the theme a little more. Although the food came with chopsticks, the containers were too modern and although the white wine came in a metal ice-bucket, it also came with cheap plastic glasses. Rather ruined the look. And perhaps the dancers, who were there to encourage people to dance after, could hold back on the full performance so that those of us with two-left feet might not feel so intimidated and not need so much courage to venture out onto the dance floor.

Other nice little extras, for the higher paying clients were sofas in the Library area and copies of the book The Fingersmith by Sarah Waters, (the Victorian London story the film was based on, transposing the story to Japanese occupied 1930's Korea). One lovely couple, on receiving their red ribboned books, decided to share one and kindly give us the other.

A great night pulled off by Secret Cinema X, in a great location - the Troxy with a great film, The Handmaiden. A memorable night but I would, as Secret Cinema says, 'Tell No One' if they hadn't now released me from my vow of silence. 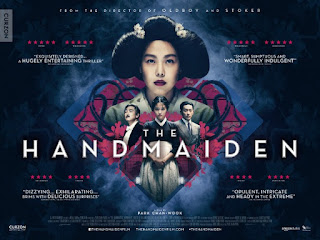