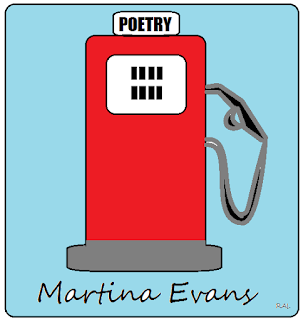 Martina Evans, as the youngest of ten children growing up alongside a petrol station in Cork, uses all such life experiences in her poetry. Today Martina read some of her poetry and discussed her writing life with a Royal Literary Fund reading group in the Whitechapel Ideastore,

Although, also a novelist, Martina says she prefers poetry, partially because, as she says, she is 'better at it.' She talks about how people say that everyone has a novel in them, she, more realistically believes 'Everyone has a poem in them.'

When asked, 'Would it matter if no one read your poetry?' she answered, that she would still write, 'but it would be different.' This is most apparent considering her recitation of her poems for the audience that day. Carrying on an oral tradition, Martina's poems, especially came to life with her Cork accent and the particular tones and rhythms she had had in mind when she first wrote them (with a little poetic license taken, in an organic editorial). This coupled with the insights into her stories joins the audience more robustly in the contract or relationship, that is other side of the balance of writer and reader.

Although Martina's poetry is mainly freeverse, she told her audience 'I hear a very strong rhythm'. This,  she considered to be from her mother. She said, 'I sometimes think my mother is speaking out of me.' 'I like the music of voices,' she told her audience, 'like Joyce.' Martina recalled overhearing her mother, a widow amongst widows, saying, 'Now we can talk openly about men'  and realized later how this was iambic pentameter, a form she is working with at the moment. The physical shape of the poem on the page is also a consideration for Martina's when it comes to form. It is part of her process, as she said, 'like building a house on a page.' When talking about how conscious she had been of falling in recent times, she mentioned a poem she wrote about going down into the basement with some rhyming couplets like the steps going down into the basement.

Memory plays a large part in Martina's work. From the memories she uses of her childhood in Cork to those more recent of London. Research into first-hand accounts are the backbone of some of her more historical or political poetry while at the same time Martina talks of how her mother would freeze in the middle of a story realizing, if she was not careful her words would appear in print in one of Martina's poems. Martina even talked of the initial  difficulties of memorizing her poetry, and the benefits of this kind of activity as a brain exercise and to prevent memory loss in the long term,

I talked to Martina about my own difficulties with memory, ie; that I could recall very little of my childhood, like she was able to. And that her work inspired me to make those 'links' she talked of. When she spoke of a poem 'Horses in the Basement', I thought of one I had in mind called 'Turkeys in the Attic'. I had a memory of a nightmare I'd had as a child where I could hear the movement and trilling of turkeys overhead in the attic and the appearance of white feathers at strange times. However I found out this wasn't something I imagined or dreamt but did happen. The turkey's ended up killed and plucked and I had thought it was just a dream (perhaps to disassociate). I have been inspired by Martina's poetry to investigate my memories more deeply and ask the questions of family that might be part of some stories of the future. Like Martina's ones of taking cats to the vets in velvet bags or run ins with dentists or 'anti-erotic' oysters. Martina's stories are those celebrated in Kavanagh's poem Epic where the local stories of times, places and events are promoted to a glory, in her poetry, on a par with any epic story.

Note: Martina is also a teacher of creative writing and suggests using the exercise 'I remember...' as a memory jogger. Write the words 'I remember' and write whatever comes to mind (example here).
Posted by Rosaleen Lynch at 18:26