On Loneliness: The Scandal

'The level of the salt in your shaker decreases
at the same excruciating rate, day after day.'
(Zoë Heller, 2003, p. 99)

Reading Notes on a Scandal by Zoe Heller, I found one of the most visceral descriptions of loneliness I've heard since I accidentally received a phone call from an elderly man complaining of having been neglected for months.

'People [...] think that they know what it's like to be lonely. They cast their mind back to the time they broke up with a boyfriend [...o]r the week they spent in a Bavarian steel town. But about the drip drip of long-haul, no-end-in-sight solitude, they know nothing' (Heller, 2003, p.186-187).

'They don't know what it is to construct an entire weekend around a visit to the launderette. Or to sit in a darkened flat on Halloween night, because you can't bear to expose your bleak evening to a crowd of jeering trick-or-treaters. Or have the librarian smile pityingly ans say 'Goodness, you're a quick reader!' when you bring back seven books, read from cover to cover, a week after taking them out' (p.187). 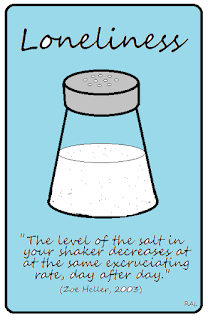 Olivia Laing (2105) writes in The Guardian about a kind of loneliness we can see in Heller's book, which 'centres on the act of being seen. When a person is lonely, they long to be witnessed, accepted, desired, at the same time as becoming intensely wary of exposure.'

This, according to Laing (2015) can trigger 'hypervigilance for social threat' where the person 'becomes hyperalert to rejection, growing increasingly inclined to perceive social interactions as tinged with hostility or scorn. The result is a vicious circle of withdrawal, in which the lonely person becomes increasingly suspicious, intensifying their sense of isolation' (1bid).

This gives us an insight into viscous circle of loneliness and how with the constant decrease of self esteem, much like the salt in the salt shaker, which not only marks the slow passing of time but the ever decreasing feelings of perceived opportunities left for the lonely to have others sit at their table.
Posted by Rosaleen Lynch at 13:26