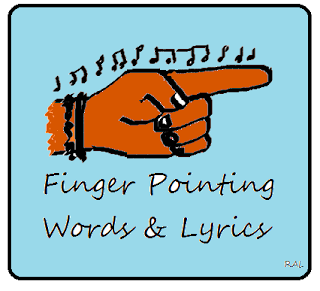 The old adage about every time you point a finger at someone there are three pointing back at you tries to prevent a blaming culture and have us all take responsibility.

Sometimes though, we need to point fingers.

Sometimes we just need to say things, because they need to be said.

Bob Dylan said his song Blowing in the Wind, wasn't a 'protest song' because he didn't write protest songs, he said:

'I'm just writing it as something to be said, for somebody by somebody.'

Sometimes though we need to point fingers, as Dylan said:

'you know pointing to all the things that are wrong.'
(Cited by Jon Bream in Dylan: Disc by Disc, 2015)

Things like war, inequality and injustice. Whether it is the Vietnam or Iraq war or Civil Rights in the US in the 60s or the racism of Brexit in the UK today.

Rolling Stone has a Ten Best Protest Songs of All Time list. As do most music media sites. My favourites include the following ones (in no particular order) from my childhood and since:
As I write this I happen to be wearing a Tshirt with Bob Marley's Get Up Stand Up emblazoned across it and just now listened again to Bragg's  Between the Wars in tears. We should be upset. We are still battling for a living wage in the UK and still seeking justice and equality in so many ways. We should be singing songs like this.

One of the lines which has always caught me is Manic Street Preachers':

'If you tolerate this your children will be next.'

This reminds me always of the words from Martin Niemöller I spoke of in my post Never Doubt:

In a Guardian article Jonathan Luxmorre and Christine Ellis (2016) ask 'where are all the protest songs?' Sadly I wonder if they have all already been written and performed and we are just waiting for people to finally hear them.
Posted by Rosaleen Lynch at 13:10