Disappointment: Pulling Back the Curtain 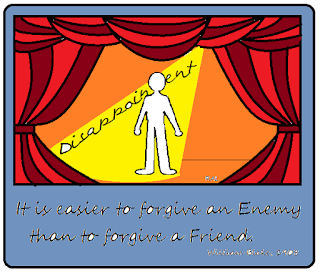 The closer someone is to you, the more you will feel disappointed by their inconsiderate behaviour. Your expectations are different of them compared to others. You expect more. And you are disappointed when they fail to meet those expectations.

Of course argument against this view will come from the closest relationships we have, where we end up taking each other for granted and 'don't sweat the small stuff'. But when the balance of the 'small stuff' either becomes so prevalent as to tip the scales, or the infrequency of meeting means the 'small stuff' is the 'only stuff',  then it matters.

You expect more from someone who you have a relationship with and are disappointed more when they don't seem to care. It is that pedestal you put them on. Or the Wizard of Oz effect. You expect and are promised one thing and behind the curtain you find instead, over and over again, disappointment. The naked truth is revealed every time in the beam of the spotlight. They don't care about disappointing you, because if they did they wouldn't.  But you keep turning up and pulling back the curtains. It's tiring but one day you might be surprised.

Email ThisBlogThis!Share to TwitterShare to FacebookShare to Pinterest
Labels: quote