On Writing: Fact in Fiction


Write What You Know


As Richard Davies mentions, there are many lawyers who have become writers like John Grisham, the author of The Firm and The Pelican Brief. He wrote what he knew. However when Ursula Le Guin was told to 'write what you know' she knew 'imaginary countries, alien societies on other planets, dragons, wizards, the Napa Valley in 22002 [...] better than anybody else possibly could' so saw it as her 'duty to testify about them' (Le Guin, 2003).

Research What You Don't Know

As Scott Francis from Writer's Digest discusses, research adds 'verisimilitude' to your writing. How do you do this? Of course if you write what you know, like a lawyer writes about the legal world, there will be a true-to-life feeling because you know that life. What do you do when you don't? Get to know the world. Like Le Guin create the world or if the world exists already find out about it. How? 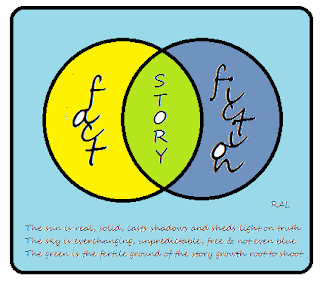 Have the Wisdom to Know the Difference


What we think we know and what we actually know, (even when we research) can all be clouded by prejudice, subjectivity or other such interpretive muddying of the waters (ie. Using our own eyes to see our fictional world rather than the character's point of view).

'Truth is stranger than fiction,
but it is because Fiction is obliged to stick to possibilities;
Truth isn’t.'