War: What is it Good For? Absolutely Nothing

All My Sons by Arthur Miller
My rating: 3 of 5 stars


Arthur Miller's play All My Sons, is a sad tale of loss in war, the least of which seems to be that of the war itself. Areas, the play tackles, include the sense of responsibility and commitment to the world that young men gain in a war, some of the horror and industry's gain from and the ethics of making money from war and death.

However, the play tackles the responsibility of the individual and not that of society. It has individual men take responsibility for individual elements of the war (such as that of providing defective parts for planes) rather than society and its promotion of the American Dream. This individual person's failing was treated as shocking and unforgivable, because it resulted in the death of pilots. Whereas the idea that the affected individual men, who were pilots, were dropping bombs on other people, and killing them was taken for granted. At no time was war itself ever questioned. It just seemed to be legalities. Illegal killing was bad but it seemed legal killing was acceptable. An individual person's mistake which resulted in accidental death was treated as worse than the deaths which resulted from a society's intentional and deliberate actions to kill. Not a message I am comfortable with. But one, unfortunately which seems to pervade much of war literature.

This glorification of war may even finds it roots in society's unrelenting, at-all-costs, pursuit of the 'American Dream', much like the individual who will do whatever it takes to protect and provide for his family. An individuals flaw is punished and order is restored but society continues to create, promote and nurture such flaws, so for that we will all suffer.

As Gale (2011) contends, 'Americans fighting in the war were fighting for the preservation of the American Dream.' Yet when one man makes a mistake by attempting to do the same in his family business, he is abhorred.

And so society hides from responsibility in it the safety of  hegemonic power. During the time frame of the play, atom bombs were dropped on Hiroshima and Nagasaki by the US. Actions which, the New Statesman (2015) consider 'war crimes', as Robert S. McNamara (US Secretary of Defence), stated 'If we'd lost the war, we'd all have been prosecuted as war criminals.' 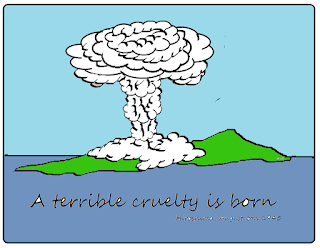 Gale (2011) How the American Dream Has Changed Over Time, Gale Student Resources in Context. Detroit
Awan, A. (2015) Hiroshima and Nagasaki: The Single Greatest Acts of Terrorism in Human History? The New Statesman


View all my reviews
Posted by Rosaleen Lynch at 23:38