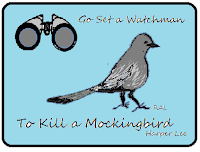 Author Harper Lee passed away on the 19th of this month and having read and been inspired by To Kill a Mockingbird, I turned to her other novel Go Set a Watchman to find some solace. I was aware there had been controversy around this novel, however I was interested in knowing where young Scout's story had originated. The book, a precursor of To Kill a Mockingbird has an older Scout trying to find her way in life and reminiscing about her childhood in an effort to make sense of her world.


Go Set A Watchman will be forever compared to Harper Lee's To Kill a Mockingbird and at the moment, in the main, seems to be seen as coming up short. However if we talk about the message of the novel, rather than the plot or structure, we might see it as being the better of the two in the future. The message?
If, by  reading this book, any one of the above is understood, maybe we will not take for granted the benefits we have and try harder to be better people.

Go Set a Watchman was published in 2015 but much of its material pre-dates To Kill a Mockingbird (Telegraph, 2015). Although it was never published in the fifties (perhaps because of its inflammatory politics) it is as pertinent today because of those same politics and social commentary.


Comments on Need and Greed:

'If you did not want much, there was plenty.'


'The only thing I’m afraid of about this country is that its government will someday become so monstrous that the smallest person in it will be trampled underfoot, and then it wouldn’t be worth living in.'


Comments on Prejudice, Conscience and Faith:

' Prejudice, a dirty word, and faith, a clean one, have something in common: they both begin where reason ends.'

'[E]very man’s watchman, is his conscience.'

'[T]he twenty-first chapter of Isaiah, verse six: For thus hath the Lord said unto me, Go, set a watchman, let him declare what he seeth.'

'As you grew up, when you were grown, totally unknown to yourself, you confused your father with God. You never saw him as a man with a man’s heart, and a man’s failings—I’ll grant you it may have been hard to see, he makes so few mistakes, but he makes ’em like all of us.'

Comments on Friendship and Love

'[A]lmost in love... No, that’s impossible...either you are or you aren’t. Love’s the only thing in this world that is unequivocal. There are different kinds of love, certainly, but it’s a you-do or you-don’t proposition with them all.'