What Would You Do With an Angel? 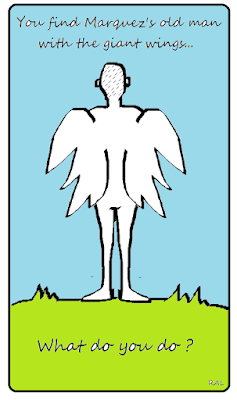 'A Very Old Man with Enormous Wings' written by Gabriel García Márquez tells the story of the reactions of a poor family and community to the finding of a bedraggled angel at the bottom of the garden. What would you do?

The people he met, including a family, clergy man, doctor, mob, pilgrims and a woman who believed in folklore, interacted with him in many ways, ranging from the ridiculous to the understandable and all consistent with the magic-realist genre.

Imagine if you found an angel...

tell someone
stare at him with surprise
stare at him so long he become familiar
speak to him
assume he is an angel
hold him captive
club him to death
put him on a raft with food for 3 days
lock him in a chicken coop
make fun of him
find entertainment and throw food to him as if he is in a zoo or circus
make him mayor of the world
make him high ranking military to win wars
cross breed him with humans to make wise rulers of the universe
check to see if he speaks Latin
consider him an impostor because he does not speak Latin or show deference to clergy
conclude that he is not an angel if he is not perfect in actions and appearance
call him the devil because he does not live up to expectations of what an angel should be
describe wings as as little a prerequisite for being an angel as the difference between a bird & plane
check with higher orders in the church for advice
mob the place where the angel resides to see it
fence off the area of the miracle and charge entry
seek a miraculous healing from the angel
burn candles in his honour
make him eat mothballs – folklore angel-food
provide him with a feast offered up in penance
give him sustaining plain and easy to eat food
let the chickens groom his wings for parasites
allow people to take feathers to restore their ailing and failing bodies
throw stones at him to make him move and stand
burn him with a branding iron to rouse him
examine him for a belly button
check if he speaks Aramaic
wonder how many of him could fit on the head of a pin
discover if he was just a human mutation from Norway
lose interest in him when someone new comes along who you can empathise with or understand
move on to the next news-cycle because he is not meeting your imaginary needs
let his extra-ordinariness become so ordinary he is no longer considered a concern
examine his biology logically and see how he could be considered normal rather than humans
take him so much for granted eventually that he became like the house pet being shoed from here to there as a nuisance
cover him in a blanket and let him sleep in the shed like an old dog
get concerned by his demise because the disposal of angels bodies is out of your area of expertise
be relieved, as he finds health and energy again and recovers, relieved that this unexplainable entity is leaving your life, a question mark is gone.
miss the extraordinary when it is gone

Whether it is measuring him against certain criteria, judging him with a prejudiced eye or having expectations of him which are only within a limited area of experience and knowledge, an angel may not fare well in the real world.

Our lives could benefit greatly from the angel but we, ourselves, might be the barriers to achieving those benefits with our very earthly and earthy views, prejudices and ignorance.

And even worse than that - we might miss out on the miraculousness of the extraordinary in our need to negotiate our surroundings and experiences into ones which are familiar.

Spotting angels in the world isn't necessarily the hard bit – it's what to do with them next.

As Gabriel Garcia Marquez warns, if we are not careful we can, as the angel's captors did, look 'so long and so closely' at the miraculous that surprise can be over come and the extraordinary fades into the ordinariness and safety of the familiar.

Fraser (2014) from the Guardian considers that:


'magic-realism...employs the magical as a form of imaginative resistance to the harsh and totalising logic of imperial rationality. It seeks the freedom to think outside the box of established wisdom: that is, by rubbing away the line between the real and the fantastic, it frees the imagination from the constraints of how things are. It is revolutionary stuff.'