On Reflection: The Process of Reason

Reason, according to the Oxford Advanced Learner's Dictionary can be defined as follows:


Reason is very much at the heart of reflection and the process of reflective practice :

Recognise or Recall experience - focus or pay attention during or after
Explore Experience feelings and understanding
Assess the level of understanding and lack of understanding
State the central theme or the gut feeling of the experience
Open up to alternatives, a different perspective, empathise, stand in someone else's shoes
Now what? What do you do with it - what can be learned and how is it applied? What conclusions have you come to? What is the next action? (based on Kolb Learning Cycle, 1975) 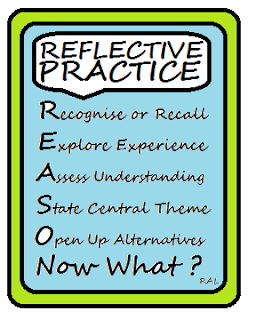 Recognise/Recall: In the experience I recall standing at the gate with four colleagues, after 20+ children had left the centre. A man stopped his bike outside and read a notice nearby saying 'God is Love' and asks in an accusatory tone, 'Ah but does God love Bob?' and points to himself, the aforementioned Bob. I recognised this was an experience I needed to pay attention to in it and after.

Explore Experience: I felt put on the spot, in front of colleagues. I felt his attack and frustration with life erupting in the words 'does God love Bob?' I was worried that if I didn't say something that it would put someone else on the spot and that if I said the wrong thing it would escalate.

Assess: I didn't know what was wrong with Bob and why he felt that he hadn't got a fair deal or did not feel valued, but I did know his manner was showing these feelings and wanting to be heard.

State: The central theme was that where Bob should get unconditional positive regard, he wasn't and was either seeking it elsewhere or railing against the forces which made it so. My gut feeling told me he was feeling undervalued and unloved.

Open up: I imagined what its like to feel like that and what would make me feel better. Someone listening, humour and feeling cared about..and unconditional positive regard.

Now What? So on reflection when this stranger stopped on his bike and asked:

'Ah but does God love Bob?'


I answered with a smile:


And Bob smiled with delight, gave an appreciative chuckle and got on his bike to the sound of conspiratorial laughter and calls and waves goodbye.


And then I once more start the process after the event has ended and recall the feelings of pleasure and sense of achievement, having as the corny saying goes, 'turned a frown upside down' and continue the rest of the REASON process all over again, having reflected in action,  I then reflect on action (Schon, 1983).