Challenge & Celebrate: Do Not Tolerate 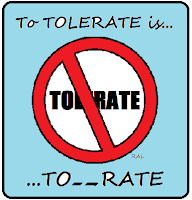 At the Rainbow Hamlets' Hustings for Tower Hamlets Mayor, I heard variations of the word 'tolerance' more times in an hour than I've heard at any other time. Mayoral candidates spoke of everything from 'tolerating' lifestyles to creating a culture of 'tolerance'. Derivations of the word  were used in political catchphrases aimed at engaging a group of  LGBTI potential voters, while creating a political context dominated by heterocentric discourse. Every time a candidate said they wanted to promote 'tolerance', it was another marker of the power structures of hierarchy that promote condescension in place of celebration.

The Oxford Dictionary tells us that to tolerate is to:


'Allow the existence, occurrence, or practice of (something that one dislikes or disagrees with) without interference'


'Accept or endure (someone or something unpleasant or disliked) with forbearance'

So to teach tolerance is to teach people:

It shows a superior position over the aspect of life which the person is tolerating. I can tolerate an irritating noise. I put up with it. I can stand it. It is tiresome. It can be hard to endure. I accept noises are a part of the world I live in.


It only goes one of two ways. People have the right to behave as they do as long as it doesn't impinge on others (including my own) rights. There is nothing I expect to do or feel if this happens. However if their behaviour does affect others' rights, I challenge that behaviour. I do not tolerate.

We may  tolerate the bad behaviour of our children while they learn, while we are in positions of power with responsibility for their welfare,  but we also challenge their behaviour so they can learn.  Anyone, at an age of maturity who is able to make decisions for themselves are not to be tolerated. They are past the stage of their development where they should accept being patronised as if we know better. They should not tolerate anyone of us thinking it is up to us to allow them to behave in the manner in which they behave. They do not need our acceptance. And if their behaviour is such that we consider we must endure it, we must challenge it.

Challenge and celebrate, do not tolerate.
Posted by Rosaleen Lynch at 13:32