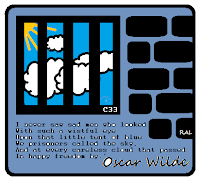 Irish author, poet and playwright Oscar Wilde, was sentenced to two years in prison with hard labour on the 25th of May 1895, because his identity as a gay man was equated with the criminal offence of 'gross indecency'.

It has taken 120 years for Ireland to look for marriage equality for the Wildes of today, and although 62% voted YES, 38% still voted NO. There is some movement but not enough or fast enough.


Oscar Wilde wrote many great works like The Importance of Being Earnest and  Picture of Dorian Gray and children's short stories such as The Happy Prince. The following verse is a glimpse of the epic poem,  the Ballad of Reading Gaol , the last thing he wrote before he died:


'I never saw sad men who looked
With such a wistful eye
Upon that little tent of blue
We prisoners called the sky,
And at every careless cloud that passed
In happy freedom by.'
Oscar Wilde 1897

This verse could refer to Wilde or anyone in prison, physically or figuratively. So many people in the world today are prisoners of their circumstances or the context in which they live. And we are all the prison guards, in our actions, words and inaction.

Today one more door in one more jail lock is opened. Perhaps one day we can throw away all the keys.


Note: In prison Oscar Wilde lost everything including his name, he was referred to as C.3.3.
Posted by Rosaleen Lynch at 19:43