Goals can seem like near or distant points on the path or road of a map and sometimes can appear to be, not only off-road, but look like completely uncharted territory. Practising my map reading skills, for the assessment of the Basic Expedition Leader Award (BEL), I was reminded of the first time I did the assessment 12 years before and how much of a daunting prospect I'd found it then. Although I was spending time brushing up on my navigational skills I was most worried about my ability to use those skills under the pressure of carrying a 20 Kg rucksack over long distances with people I'd just met and being assessed for a whole weekend while also getting little sleep while camping.

I wasn't as young as I used to be. I was older, less fit and had more injuries than 12 years ago and wondered if I could hack it. I'd only a few months ago been on beta blockers and recently recovered from problems with high blood pressure and a sprained ankle, so was finding returning to fitness hard going. Every week I did a practise 30K+ walk, and upped my everyday Kms and had started running again as my sprained ankle had healed. I was improving but didn't feel like I was getting anywhere fast.

Then I saw this advert and was struck by its appropriateness and felt once again on solid ground. Like the woman said:

'I'm slow but I'm lapping everyone on the couch.' 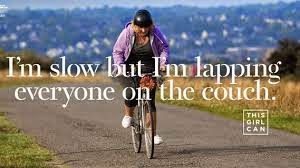 I was sold. I got it. I'd been worried about how slow I was and how slowly I was recovering fitness but I then realized how great I was doing, compared to my previous self (or anyone else) stuck on the couch.

I was on the map. I was trying to get some where. And it wasn't just a goal, that once achieved was finished with. Fitness is forever and is a constant journey to maintain, There is no arrival, end point or destination but pit-stops and view points along the way and places to mark on the map, to say: I was there, look where I am now!

Le Guin, U. (1969) The Left Hand of Darkness,  Ace Books, New York
Sport England: This Girl Can  & This Girl Can Website: www.thisgirlcan.co.uk
Posted by Rosaleen Lynch at 04:52