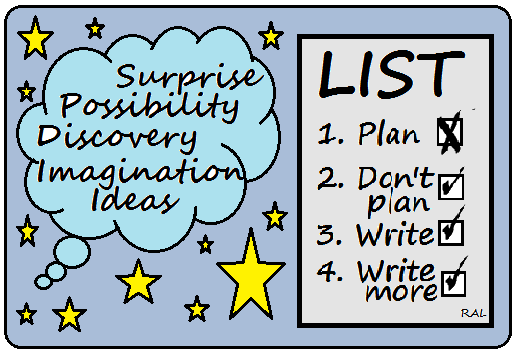 I am warned, in The Craft of Novel-Writing, that if I 'linger at the planning stage' that I 'may never start the book at all' (Doubtfire, 1982, p.12). Any planning needs to leave room for the kind of organic development that can't be planned. A book should be 'fluid' and 'a voyage of discovery' that is 'full of surprises' and that it is more likely that the reader will be surprised if I (the author) am 'continually surprised' (Ibid).

This, Stephen King describes as 'an immense feeling of possibility' with which he wrote his very first story as a child (2000, p.28). According to King, 'good story ideas seem to come quite literally from nowhere' and the writers job 'isn't to find them but to recognise them when they show up' (2000, p.38).

Doubtfire (1982) advises keeping note books handy in the planning stages, to catch the ideas as they come (p. 9-12). In 1982 when the book was written, mobile phones weren't as prolific so wouldn't be available, as they are now, at that moment you want to jot something down.

Doubtfire (1982) looks at a book of about 70-80000 words and suggests breaking it into 30 chapters of around 2500 words (p.11). The 1-30 method, as advised by Winston Clewes, involves writing 1-30 down a margin of a page and by the 1 put a 'possible opening' and by the 30 an 'idea for an ending' and by the other various numbers 'brief notes on some highspots of the story' (Ibid). It doesn't all need to be planned, but as you write, more notes by the chapter numbers and changes and more notes again will help to sort any 'muddle' out, and help to 'plan a strong back bone for your book and build towards a powerful climax', which can also change as appropriate (p. 12).


Irving Wallace (1969) in The Writing of One Novel considers that 'Every author prepares for a book in the way that best suits his psyche' (p.56). Wallace liked to plan using an outline, which he considered to have the 'virtue of being creatively thought out, worked out, disciplined, in the authors mind and on paper...' (1969, p.60). However he recognises that a novelist 'who plans too carefully in advance' could create such a 'rigid mold that he leaves no room for hisimagination to soar freely or for new ideas to root and grow...' (Ibid).


When Guy de Maupassant (1888) showed Flaubert some of his early writing, Flaubert saw 'a certain iintelligence' but wasn't sure if he would go on to develop any talent. Flaubert (Ibid) advised him:


'Talent...is nothing other than a long patience. Work.'


Francesca Bell in Being a Writer, uses Haruki Murikami's analogy for writing a novel as running a marathon and considers the 'writer has to be fit for purpose and stamina is part of that fitness' (2015, p.268).

How do you train to be a writer? William Boyd in Notes on Becoming a Novelist considers that he found the 'right thing' to do to be a writer was 'writing as hard as [he] could, fulfilling [his] apprenticeship, making mistakes and learning from them' (2015, p. 291).

This apprenticeship carries with it a toolbox. Stephen King (2000) talks about the writer's toolbox of skills in vocabulary, grammar, style and form and says if you want to write to the best of your ability that 'it behoves you to construct your own toolbox and then build up enough muscle so that you can carry it with you', then he says when you are faced with something hard 'instead of getting discouraged, you will perhaps seize the correct tool and get immediately to work' (p. 111).

'[I]f you want to be a writer, you must do two things above all others: read a lot and write a lot'

King reads 70-80 books a year. I looked at my list since starting this blog in September and wondered if I was in the right ball park. By the 19th of February in Reflections on Reading I had read 19 books and since then I have read Timbuktu, The Drowned World, The Guest Cat and The Rosie Project. That's 23 books in 6 months, so in a year, at the same rate, I will have read 46 books. It looks like I have some catching up to do.

When it comes to writing, in the last six months I have attended a writing class, been editing my novel, have written a short story, some poetry, essays for an MA and written over 80 blog posts like this. King (2000) likes to get in 10 pages or 2000 words a day (p.154). However, if that is his only job I would imagine it being easier than when he wrote Carrie in between wash cycles at work. I feel like that's what I am doing and its hard work. I want to be writing all the time but when your eyes are closing and your head is dropping over the keyboard its hard. But there you go - no one ever said it was going to be easy. And all the cliches I drag out to young people I work with about hard work and achievement come to mind and I am chastened.

And I plan to read a lot and write a lot...more.