The Art of Writing, SMART Blogging and Elephant Eating

The problems of writers can vary from finding the initial idea, format or media, to their realisation in form to the way they reach their audience. Writing like any art has so many variations that saying something is finished feels almost impossible.


There are many times I have felt like abandoning my novel and calling it 'finished'. How many drafts does it need? How will I know? When is it ready? When do I show it to people?

At a writing course I subjected my prologue and first 3 chapters to the scrutiny of the tutor and the nine other people on the course, who I had either only met twice before, once or not at all. The build up to it was horrendous. The actual reading and feedback was bearable. And the editing afterwards, based on the feedback, was surprisingly productive and enjoyable. However I did tend to ignore what I didn't agree with and anything which I'd already had suspicions about was reinforced and I made changes accordingly.

Continuing to Eat the Elephant


Referring back to the Eating the Elephant  and the One Thing Every Day posts I realised that although my commitment to submit to agents every day until successful was a good idea it was not one I was ready for. Or more importantly not one the book was ready for. After editing the first three chapters I realised that the rest of the book now needed the same treatment.

So how do I get there? What is my goal (aside from the ultimate one of having my book published and appearing on children's school reading lists)? So in the meantime, what is my interim goal and how will I know I have achieved it?

We learn at school or at work about SMART goals or targets - could that system work here?

SMART makes sense and is a template used in various other motivational strategies. For instance Locke and Latham (1990) talk about 5 Principles of  Goal Setting and needing the have the following to motivate (the brackets show the relevance to SMART:
Any success I have enjoyed in any area from formal education to writing practise have worked in this way without me knowing it. 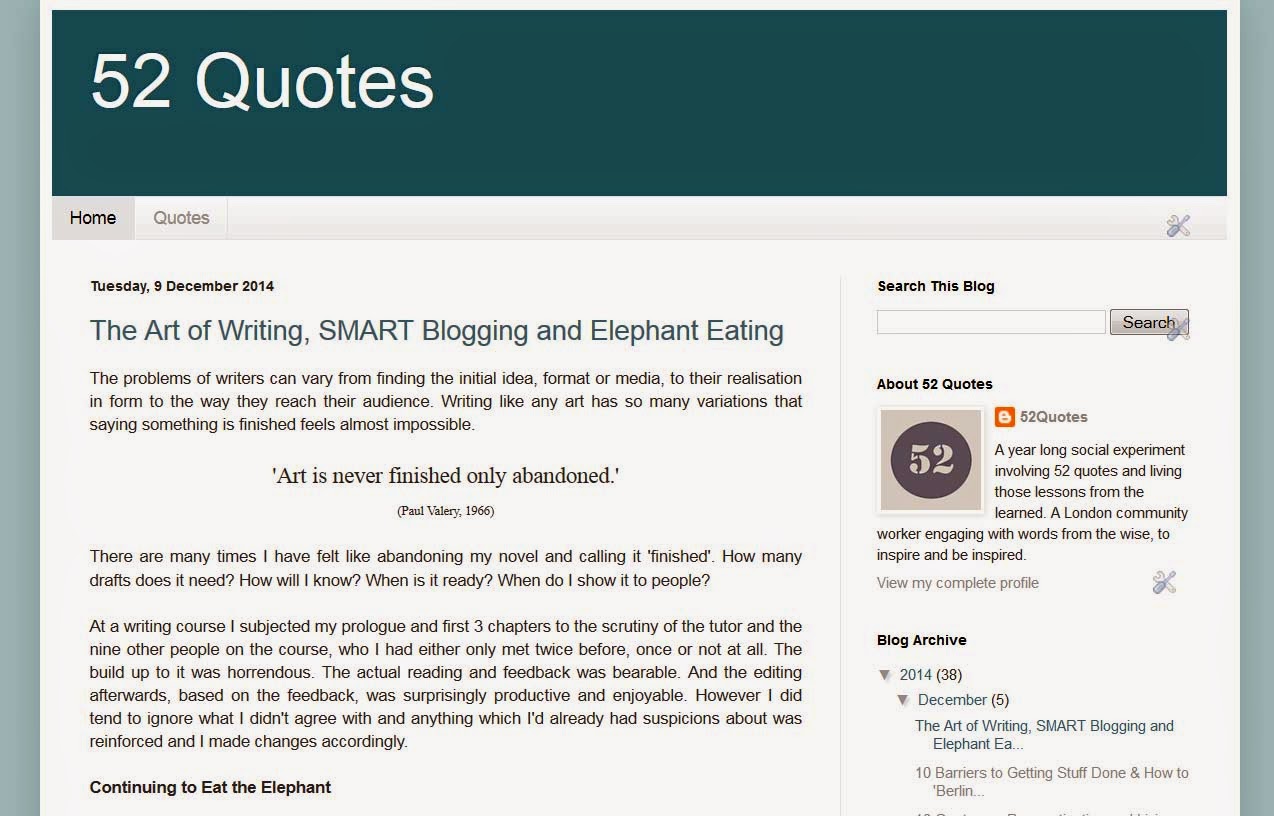 Take for instance, even the act of blogging. When left to my own devices in the past I might have blogged intermittently on anything that took my fancy, whereas this blog 52 Quotes has taken a new turn from previous efforts with regular posts, researching in between and a focus for every week on a new area for development. I did not apply any of the goal setting strategies at the outset but now can see why I am achieving more than I have in previous efforts, when I apply the formula now.

I have been clear in what I am trying to achieve from 52 Quotes - learn from the learned. The time frame is 52 weeks, meaning at least 52 quotes and at least one blog post a week. It is relevant to my work as community worker and realistic in terms of scope and time management and skill base. It is a commitment I can make and have agreed with my peers to keep me motivated and challenged. I can measure success by by my learning (recorded here) and from feedback from peers. It is a project that is complex enough to engage and challenge me while also able to be broken down to attainable parts for an attainable overall end result.

Applying the Formula to My Writing

My  Goal: To complete the rewrite of the book and synopsis by the end of Christmas Holidays (Jan 6th) and start sending out submissions every day from the 7th to agents and seeking critique from them and others who I send the full book to for feedback.

In other words one elephant will be eaten by the 6th and I will start on another one on the 7th. That's how you eat the elephant - one bite at a time.